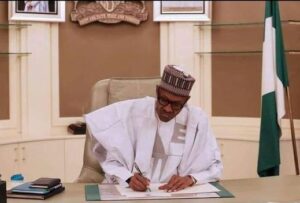 A presidential statement issued on September 15, 2022, said that President Muhammadu Buhari has approved the appointment of Major General Barry Tariye Ndiomu (ret’d.) as Interim Administrator of the Amnesty Program.

The appointment of Ndiomu was immediately received with delight and applause in the South-South geopolitical zone of Nigeria and other parts of the country, saying, it is a timely appropriation of experience and capacity to increase regional development.

According to Earl Osaro Onaiwu, a nationally acclaimed political communications consultant and Chairman of Governors Mandate Network, “the appointment of General Ndiomu is unarguably, a mandate of a higher call to duty. More so, at a time when the country is facing monumental challenges that call for only the best hands in leadership positions of the nation’s development and interventionist programs.”

Continuing, Earl Onaiwu said, “the appointment is an onerous responsibility borne out of the confidence that the President and C-in-C has on him and even as a testament of humility, lucidity of character, professional sagacity and highly numerate analytical mind which is a culmination of his deep-rooted commitment to serving the people.

The people of his home place, Odoni in Sagbama Local Government Area of Bayelsa State and the South-South have expressed appreciation to President Buhari for choosing the retired General to represent them in that position, at this time when the state is looking for selfless and intelligent individuals with the capacity to coordinate the interventionist programs that have been earmarked for the benefit of the people of the region.

The Governors Mandate Network boss, called for cooperation from the people, saying that the appointment of General Ndiomu is indeed, a round peg in a round hole, which “represents a watershed of hope to mobilize the humanitarian and development stakeholders to raise the ante of relevant programmatic strategies to embrace attentional intervention projects that would increase the capacity of the people and stabilize the entire South-South”, he said.

What many people were unaware of is that, the new helmsman of the Amnesty Program is a silent achiever who has held several command and staff appointments in the course of his successful military career before he retired in December 2017.