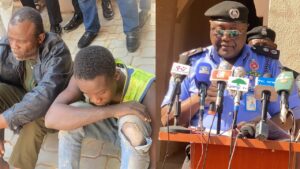 The State Commissioner of Police, Ayuba N Elkanah made this known at a press briefing at the State Capital said the arrest is part of the fulfillment of his promises to redouble effort and work towards achieving more than what he has achieved in 2021. So that the aspiration of returning Zamfara to its former status

Gentlemen of the Press, our working synergy with other security agencies in Zamfara State is very cordial and is yielding positive results in the ongoing operations against criminal elements in the State. To corroborate my statement, apart from the joint operations at the hinterlands and patrols within cities and towns in Zamfara, on 7th January, 2022 Military operatives deployed along Dansadau road in Maru LGA intercepted and rescued 17 kidnapped victims who were abducted since on the 14th December, 2021 in Wamba Village of Mariga LGA of Niger State. The 17 rescued victims were handed over to the Command by the Brigade Commander 1 Brigade Nigerian Army, Gusau where they were medically checked, debriefed by the Police and handed over to the Commissioner of Police Niger State Command who would re-unit the victims with their families.

Our attention has not been diverted to fighting banditry in the bush as to ignore other conventional crimes within cities and towns. The following are the suspects arrested in Gusau and Tsafe LGAs for various offences; 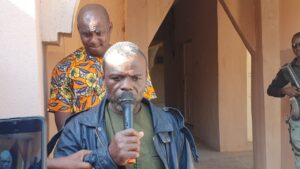 Our attention has not been diverted in fighting Banditry as to ignore other heinous crimes being committed in the urban centres. To this end, the following suspects were arrested in connection with various offences as highlighted below: –

On 12th December, 2021 at about 1400hrs, One Ali Yakubu Aliyu ‘M’ reported at Central Police Station Gusau that, his son Ahmad Yakubu ‘M’ a 9yrs old boy was missing. On receiving the report, Police detectives swung into action and commenced a discreet investigation into the matter.

On 28th December, 2021 at about 0930hrs, the Police detectives received an intelligence report with regards to the earlier report that on same date at about 0900hrs, a corpse of human being was found in an uncompleted building at Barakallahu area Gusau, with its two (2) hands and legs tied with rag and head covered with polythen bag. Detectives proceeded to the scene and found the corpse with some of the human parts removed, and later evacuated to the Hospital for autopsy. 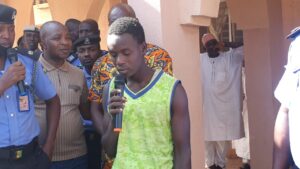 As a follow up to the case, on 4th January, 2022 at about 0200hrs, Police detectives acted on intelligence reports and arrested the above mentioned suspects in connection with the case.

During interrogation, the second suspect, Abdulshakur Moh’d, confessed that this was the third time he was contracted by the first suspect Aminu Baba to source for human parts for him at the sum of five hundred thousand naira (N500,000) which he successfully did for the first and the second times before his arrest. Base on this, he connived with Abdullahi Baba and Ahmad Tukur deceived the victim, took him to an uncompleted building, killed him and removed the following human parts; Intestine, Esophagus, Penis and two (2) Eyes, and took them to the said Aminu Baba who in turn gave them the sum of five hundred thousand naira (N500,000) as agreed. The said Aminu Baba who is having nineteen (19) children has confessed to the crime and his revelations are assisting Police investigation in arresting other members of his gang. He further confessed that he usually eats the human parts and identified the throat as the most delicious part. He also sells some away.

On 8th January, 2022, Police Tactical Operatives led by the Commanding officer 42 PMF Squadron Gusau, while on extensive bush combing at some locations under Gummi, Bukkuyum and Maru LGAs were heavily engaged to a gun duel by some suspected hoodlums. The Police operatives successfully repelled the attack, forcing the hoodlums to retreat and escape back to the forest with possible gunshot wounds. A rocket propel launcher and locally fabricated gun belonging to the bandits were recovered at the scene.

On 28th December, 2021 the side manager attached to PHCN office Tsafe, reported at Tsafe Divisional Police Station that, on the same date at about 0200hrs, some persons went to a transformer located at Emir’s Palace area of Tsafe LGA, where they vandalized and removed away electric copper wire valued at seven hundred thousand naira (N700,000). On receiving the report, Police swung into action and commenced a discreet investigation that led to the arrest of the above-mentioned suspects on 1st January, 2022.

On interrogation, the suspects confessed to the crime and further mentioned their receiver who bought the stolen properties at the rate of ninety seven thousand naira (N97,000) only. Investigation is in progress with a view to apprehending the receivers of the stolen properties, before being charged to court for prosecution. 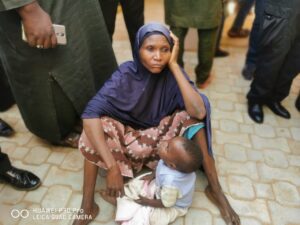 On 8th January, 2022 at about 1550hrs, Police detectives acted on intelligence report, arrested the above mentioned suspect at Tullukawa area of Gusau LGA. The suspect who held from Danyade Kaya village in Maradi, Niger Republic was arrested with her co-wife’s 2 year old child whom she confessed of the theft in retaliation to the theft and sell of her son by her co-wife. She further confessed that the reason for the theft was to sell the child and raise money for her day today needs. She will be handed over to Nigeria Immigration Service for further necessary action.

Finally, I want to call on members of the public to acknowledge the effort of the security agencies in combating crimes and criminalities in the state and continue to pray for the sustenance of peace and tranquility in Zamfara State and Nigeria as a whole.