SANWO-OLU: I HAVE DELIVERED ON THEMES AGENDA, SEEKS PARTNERSHIP WITH CITIZENS FOR DEVELOPMENT 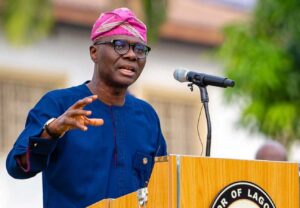 Lagos State Governor, Mr. Babajide Sanwo-Olu, on Wednesday urged all Lagosians to partner with his administration as he continues to deliver good governance and dividends of democracy for the good of the State.

The Governor said his administration in the last two years has delivered substantial parts of his campaign promises with laudable achievements in transportation, health, environment, education, technology, entertainment, tourism, security, governance and other critical sectors as well as making Lagos a 21st Century economy, all which were parts of the THEMES developmental agenda.

Speaking at the opening ceremony of the 12th edition of the Lagos Architects Forum organised by the Lagos State chapter of the Nigerian Institute of Architects, held at Eko Hotels and Suites, Governor Sanwo-Olu, said his administration is doing everything possible to ensure that Lagos remains safe and secure for all citizens.

Speaking on the theme, “The city of Lagos: The next 25 years” said his aspiration is for Lagos to stand toe-to-toe with other cities in the world.

He said: “I want to assure you that the picture for us is a picture of a Greater Lagos. It is a picture of a Lagos that we want to remain in the comity of great cities. It is Lagos that will not only be resilient but will be livable and improve the qualities of life for its citizens. We believe that it is only by ensuring modern ways of doing business that we would be able to constantly solve some of the problems we currently have.

“You will agree with me that for us to achieve this ‘Greater Lagos’; we certainly cannot do it alone and that is why we are asking each and every one of you to join us in one form or the other. Certainly, you can critique us but also give us ideas and thoughts, challenge us and give us innovative thought process where we can also better serve you going forward.

“We are all partners in progress. It is just that we are on different sides of the coin but we all have the same objectives at ensuring that where we are, where we live and work is better than what it is today. I strongly believe that it is possible and achievable if all of us work in collaboration going forward.

Also speaking at the event, the Oniru of Iruland, His Royal Majesty, Oba Omogbolahan Lawal (Abisogun II), said necessary measures should be put in place to make Lagos better for the inhabitants by investing in public places to make it habitable for people to live, work and play.

Governor Sanwo-Olu, also received an award from the State chapter of the NIA for his immense contributions to Lagos State.

While presenting the award to Governor Sanwo-Olu, the first female President of Nigerian Institute of Architects, Arc. (Mrs) Bukola Ejiwunmi commended the Babajide Sanwo-Olu administration for quality leadership and delivery of good governance and dividends of democracy to the people.

She said the association will join hands with Governor Sanwo-Olu to ensure that his dreams and aspirations for Lagos State are achieved.

“WE HAVE DRASTICALLY REDUCED UNEMPLOYMENT, UNEMPLOYABILITY IN LAGOS” – COMMISSIONER
Previous Post
Nigeria’s Vice President knows the challenges in the country and its solutions – Fmr Governor