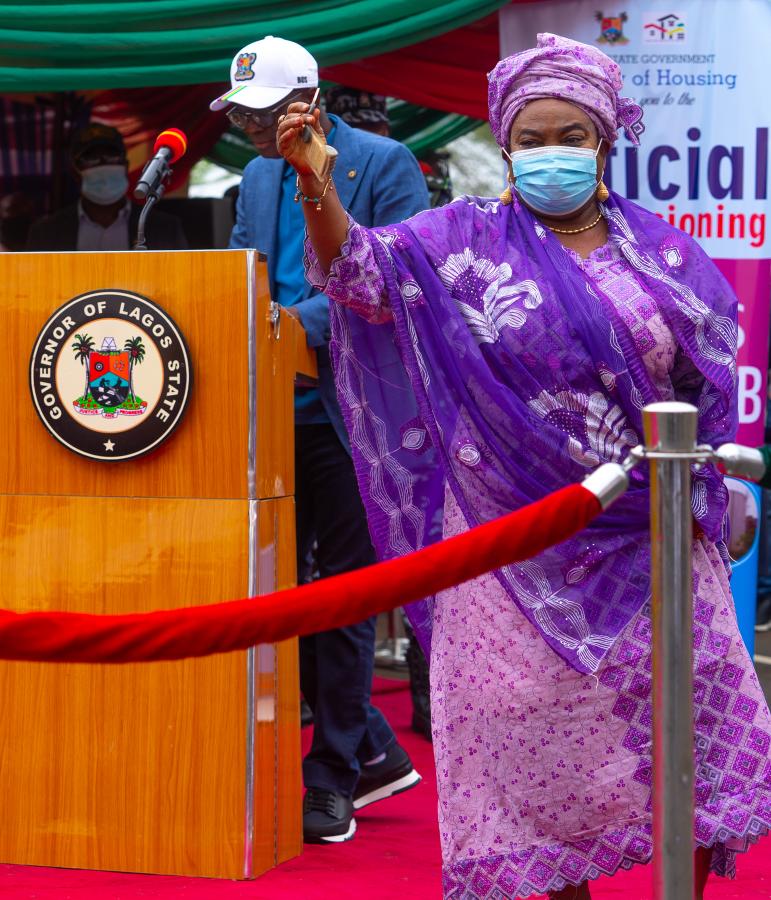 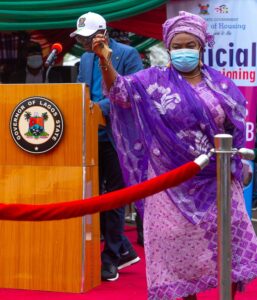 The veteran actor was on the verge of being been ejected from her rented apartment when the Governor intervened. Mama Awero was presented with the key to a new three bedroom apartment in the 360 units Lagoshoms Phase 2 scheme completed by the Governor in Igbogbo, Ikorodu.

The housing project was formally inaugurated on Wednesday at an event attended by all Government functionaries and traditional rulers in Ikorodu division. He named the scheme after former Deputy Governor and All Progressives Congress (APC) apex leader in Ikorodu, Prince Abiodun Ogunleye.

The scheme, which is sited on 6.24 hectares of land, was conceived in 2012 under the ex-Governor Babatunde Fashola’s administration. It has 10 blocks each of 120 units of one-bedroom flat, 120 units of two-bedroom flat and 120 units of three-bedrooms apartments.

The project is bordering Oba Adeboruwa Housing Estate, which is the first phase of the housing scheme.

Sanwo-Olu said the decision to complete the Igbogbo housing scheme was in tune with his pledge at the commissioning of Lateef Jakande Estate, Igando in 2019, where he reiterated his commitment to deliver all housing projects inherited by his administration.

He said: “I am elated to be commissioning another housing project in Igbogbo, one of many delivered by this administration. Against all odds, our vision for a revamped housing sector has moved from the drawing table to the level of implementation and delivery. The completion and commissioning of this estate, comprising 360 units is a promise kept and sends a strong message about our determination to make Lagos a 21st century economy.

“This housing scheme symbolises our unwavering commitment to the Greater Lagos Project, and our determination to build and deliver modern homes so that irrespective of social or economic class, all Lagosians enjoy the dividends of democracy and good governance. We will continue to bridge the housing deficit by providing decent and affordable houses to our people.”

The Governor said his administration recognised that provision of decent housing was a crucial component of sustainable development, which was why housing schemes were being funded through direct budgetary allocations, as well as public-private-partnerships. The financing model, he said, has yielded remarkable results.

Sanwo-Olu said the State Government had started to prepare for a population surge that would accompany the opening of the project, disclosing that the State had activated the revamping of socio-economic infrastructure on the axis. He said rehabilitation of Government-owned schools was being escalated to cater for additional students’ population.

He said: “We are doing extensive road infrastructure in Igbogbo and we are extending another road from Ibeshe, which will be commissioned next month. The Baiyeku Road needs to be fixed and we will look at it once we are able to push the ongoing Igbogbo road project to a significant progress.

“We are still working on Agric-Isawo and Oba Sekumade Road, while we are planning the redevelopment of roundabout at Ita Elewa. All these projects are being done to bring real development into Ikorodu division and improve the value of properties on this axis.”

The Governor also presented free three-bedroom apartments to two members of the State’s teaching staff honoured in national education awards for their quality services. They are the Principal of Government Junior College in Ketu-Epe, Mr. Dunni Ikuseyi (Principal of the Year) and recipient of Teacher of the Year, Mrs. Elusakin of Oriwu Model College.

According to the Commissioner for Housing, Hon. Moruf Akinderu-Fatai the housing project was the seventh scheme to be completed and inaugurated by the Sanwo-Olu administration, which catered for the high net individuals and low-income earners.

He said: “As can be seen, the scheme is completed with modern infrastructure that will enhance decent living. Apart from other intrinsic benefits that come with this scheme, we are glad to say that it will definitely change the statistics of housing deficit in Lagos and stem the usual drift to city centres.

“Our joy is only complete when more people, particularly the low- and medium-income earners become home owners. In line with present realities, the convenient mortgage system fostered through our Rent-To-Own scheme will be utilised to a large extent in delivering the homes to the end users.”

Mama Awero, in an emotion-laden voice, expressed gratitude to the Governor, describing the gesture as “unexpected gift”.

“Anyone who is compassionate to offer his fellow human a comfortable shelter such as this deserves nothing but prayers. I am short of words. Governor Sanwo-Olu, you have put smiles on my face in my moment of despair. May Allah support you and your Deputy,” the veteran actress said.

The Adeboruwa of Igbogbo, Oba Semiu Kasali, hailed Sanwo-Olu for keeping his word on the housing scheme.

Some of the comfort features in the housing estate include expansive car parks, streetlights, water reticulation plant and modern sewage treatment plant.