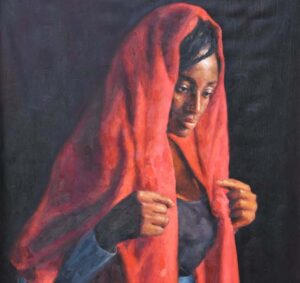 Christened ‘FOURTUNE,’ a group exhibition of paintings executed by four young artists- Raji Mohammed, Oluwafunke Oladimeji, Olufemi Oyewole and Olajide Salako will hit the Lagos scene tomorrow April 10. This show is a part of Mydrim Gallery’s Generations-Future Masters Exhibition series which was initiated by the master painter, Abiodun Olaku on the premise that there has been a decline in the standards of draughtsmanship among young artists. Thus, the idea of creative a platform to promote young creatives was formed.

In a statement by the founder of the gallery, Sinmidele Adesanya, the ‘Fourtune Four’ artists were among the selected artists who had previously participated in three editions of the exhibition.

“We recognized that they could no longer participate in other ‘Future Masters’ exhibitions as other artists had to be given the opportunity to showcase their works. Their works were really outstanding and so we proposed the idea of a joint exhibition,’’ she revealed.

Raji Mohammed, a graduate of University of Nigeria, Nsukka paints in different media such as oil, acrylic, charcoal, pastel, pen and graphite. Motivated by world great masters, he is inspired by every day realities of the people around him. In 2019, his painting titled ‘Reflection’ was selected among the 260 best works in the British Portrait Competition. His works at this show include the identity series titled, “Flower Girl,’’ and “Warm Feeling,’’

Oluwafunke Oladimeji, born in 1988, makes incredible artistic statements with her pallete knife technique, landscape and portrait paintings. The graduate of Ekiti State University honed her skills through the industrial attachment programme at the Universal Studio of Arts. Her works at this show include “Ilu Oke,’’ “Oro Aje,’’ “The Communion’’ amongst others.thi

Moods and emotions are the consistent themes in the works of Olufemi Oyewole, a graduate of Obafemi Awolowo University, Ile Ife. The full-time studio artist is a contemporary representational artist with a knack for draughtsmanship. His contribution to the show include “Evening Veil,’’ “Mutual Rendezvous,’’ “Familiar Route,’’ and “Heading Home.”

With Olajide Salako, learning from art masters such as Abiodun Olaku, Ejoh Wallace, Joshua Nmesironye and Olojo Kosoko at the Universal Studio of Art were some of his early steps to finding his own unique voice. The 40-year old artist paints in oil, acrylic and pastel. He has an eye for vibrant hues as well as the nose for the business side of art practice. His works include “Betrothed I and II,’’ “Preparation for Stardom V,’’ “Rising Star,’’ “The New Bride,’’ and “Shield.’’ The show runs till April 24.