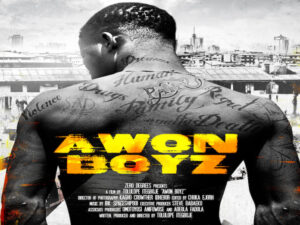 Awon Boyz, a documentary that portrays the life of the everyday Nigerian street hustler will premiere on Netflix, on Wednesday, April 14, 2021. The 38 minutes flick was created by Lagos based production company, Zero Degrees and directed by Tolulope Itegboje.

The documentary, which was originally released in 2019 draws the audience into the life of the people popularly called “area boys”, while also providing a never seen before view of what it is like to live on the streets of Lagos. The documentary tells an all-encompassing story of freedom, missed opportunities, love and self-belief of 8 young men.

Awon Boyz was shot over a month across 3 locations. It’s the first time the story of this class of Nigerian citizens is being told through a personal, human lens.

According to executive producer Steve Babaeko, “This story gives the audience a front row view of what it is like to live on the streets of Lagos. It’s a very insightful piece of art that paints a vivid picture of what life is like on the streets for the people who actually live it. It’s a very important story and we’re grateful that we get to help tell it to the world.”

According to the United Nations, the major cause of homelessness and street living in developing countries is poverty. And in Lagos, one of the most populous cities in Africa, and Nigeria’s commercial hub, living on the streets has become the day job of many, fuelling an ecosystem of artisans, beggars, traders, urchins, and many more. As one of the featured area boys in the documentary rightly pointed out, a sizeable number of the people on the streets are graduates who have looked for jobs with no success. “They try to hustle, but the way is not pure. Or after hustling, the police stops them and collects all the money. So the area boy thinks to himself, the government has robbed me.”

The documentary will premiere on Netflix on April 14, 2021, two years after a cinema premiere that attracted industry heavyweights and celebrities

Shot on the streets of Monkey Village, a slum in the highly residential area of Opebi, Oshodi and the New Afrika Shrine, Ikeja, the documentary is the first of many, and part of a plan, according to Babaeko, to bring fresh perspectives to often stereotyped people and events on the African continent.