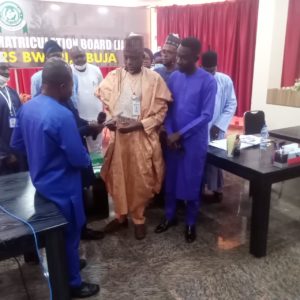 The Joint Admissions and Matriculation Board (JAMB) says it would soon clear the backlog of illegal admissions conducted by tertiary education institutions in the country.

Recall that JAMB had recently uncovered 706,189 illegal admissions by universities, polytechnics, colleges of education, and other related institutions.

Speaking after receiving the Education Correspondents Association of Nigeria (ECAN’s) Award of Excellence on Friday in Abuja, JAMB’s Registrar, Professor Ishaq Oloyede, said the move is to rescue students who have the requisite qualifications but were admitted illegally.

” (On) the issue of illegal admission that we want to put a halt to. We want to clear the backlog and ensure that those of them who have been improperly admitted but have the minimum qualification are rescued.

“We want to continue the campaign to discourage those who are committing such illegal action to stop doing such,” Oloyede said.

The JAMB boss expressed deep appreciation to ECAN for considering him worthy of the Award.

He said : “We appreciate the gesture and I want to assure you you have not done this in vain. The objective of presenting this Award will be attained. The purpose is to be able to encourage us to do more of  what we have been assigned to us by the Federal Government. I assure you, we will deliver on the mandate.”

On the 2022 Unified Tertiary Matriculation Examination (UTME), Oloyede said the Board has decided to adopt a cashless system in the registration process, adding that JAMB would also prohibit Computer Based Test (CBT) centres from selling e-PINs to guard against extortion of candidates.

“On our campaign on cashless CBT centres particularly during our registration exercise. It is known that many  CBT centres, despite the supervision, still manage to exploit candidates.

“We want  to put a stop to to that, we have intensified monitoring but part of what we are doing is to ensure we protect the students against this extortion, and that is why we are asking all those (the candidates pay through us)  and we will pay the centres (their service charge)….. with this anybody who collects money from the centre would have been seen to have done a wrong thing because you are not supposed to collect any money you…

“We are also going to ensure that ePIN is not something that they will be selling at the (CBT) centres. We will ensure that  anybody who wants to sell ePIN will not be a CBT centre, once you are a CBT centre you have lost the right to sell ePIN so that we can hold the ePIN sellers responsible for what they do.

Once you are a CBT centre you cannot also say you want to sell ePIN.”

Commending the media for its role as a representative of the people and in promotion of good governance,  Oloyede called for support in the various campaigns embarked upon by the Board to ensure a better admission system.

” We are working very hard to tighten the noose and make it impossible for those who engage in such an illicit action to succeed.

” The next issue is the campaign we have just introduced; Physical and Health Education and Computer Studies as UTME subjects. We are asking and sensitizing the public, particularly the students who are to take the exam, that these are two Science subjects that will be added to their choice to widen opportunities for candidates to be able to access tertiary education, ” he said.

Earlier, the chairman of ECAN, Chuks Ukwuatu, said the Award of Excellence, which comes every five years, was bestowed on Oloyede for his achievements in JAMB.

While saying it was initiated to encourage performance, the ECAN chairman said Oloyede was singled out for the Award for promoting transparency, sanitising the nation’s admission system, weekly publication of financial transactions of the Board, among others.