Ahead of the 2023 general elections, Opposition parties have been advised to embrace peace and shun violence as APC Campaigns shall be issue based void of insults and attack on oppositions. 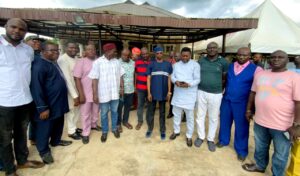 This was made known at the stakeholders meeting of the All Progressives Congress Mopamuro LGA chapter.

The meeting which was attended by Party Executives led by the Chairman Hon. Charles Omoyele, The LGA Chairman Hon Moses Sunday David, Kogi State Commissioner for Information and Communication, Kingsley Fanwo, House of Assembly Member Hon. Ademola Bello, Political Appointees from the LGA, Zonal Officials of the Party from the Local Government Area, Stakeholders of the Party and Aspirants who contested at the Party’s Primaries. 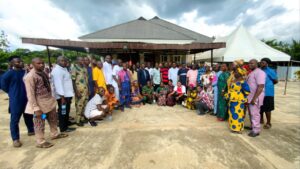 While addressing Newsmen after the meeting, the Information Commissioner explained that the purpose of the meeting is to brainstorm and fashion out ways of ensuring that APC in Mopamuro comes out triumphant in the forth coming General Elections.

His Words “in the cause of the meeting, we passed a vote of Confidence on the Leader of the state and the Leader of the Party in the state, Alhaji Yahaya Bello and We have reconciled all aggrieved members of the party who are happily here”.

Fanwo added that “We are very happy that the party have come back stronger and we can assure the Leadership of the Party in the state and National Level that as we won in 2019, Mopamuro APC will also win in 2023″.

Hon. Fanwo also assures the Leadership of the Party that all aggrieved members from the LGA have been reconciled and they are matching forward together.

The Commissioner added that all the Party’s Candidates namely Hon. Olawumi Jacob, Engr. Folorunsho Olafemi and Engr. Sunday Karimi who are vying for House of Assembly, House of Representatives and Kogi West Senatorial Seat respectively will win convincingly adding that the presidential election will also be won with a wide margin.

Fanwo finally sent a note of warning to the Opposition Parties mainly ADC and PDP to avoid crisis at all cost. His words ” We have come in Peace but we mean business. We will make sure that we trounce them in the General Elections as our campaign will be issue based”.