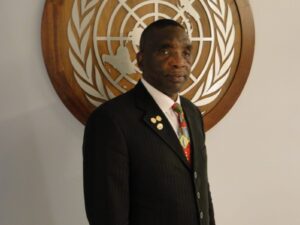 An American based non profit group, the Equal Rights for Persons with Disabilities International, has expressed the hope that the establishment of the Nigerians Disability Rights Commission would begin to address the fundamental problems of the country which had been left unattended by successive leaders until they crystallized into insecurity, terrorism, kidnapping and banditry across the country.

In a press Statement released over the weekend by the President of the non-government organisation, Chief Eric Ufom who wrote on behalf of the body, including its American and Nigerian based allies advocated for the establishment of the Commission and lay a solid foundation for the opportunities to make Nigerians with disabilities to make well coordinated positive contributions to nation building.

According to the statement, the exclusion of Nigerians with disabilities, “predated 1914 which is Nigeria’s amalgamation and 1960 Nigeria’s independence, whereby millions of Nigerians with Disabilities were completely discriminated against, marginalized, excluded from National annual budgets, programs and services, mistreated and tortured, which today, directly contributed to Nigeria’s massive INSECURITY, Terrorism, Banditry and other serious, complex problems”.

The group therefore commended President Muhammadu Buhari for accenting the bill for the establishment of the Nigerian Disability Rights Commission which was the crowning of the efforts of his predecessors in office, President Olusegun Obasanjo; Late President Umaru Musa Yarádua and President Goodluck Jonathan.

The statement which was titled, US-Based PWD Thanks and Congratulates President Buhari for ending 20 Years Struggle for a Nigerians Disability Rights Commission, signed from Houston-Texas in the United States of America reads, “We the members of the Equal Rights for Persons with Disabilities International, Inc and our Allies, thank and Congratulate HE President Muhammadu Buhari for continuing in August 24, 2020, with his making of great historic LEGACIES, while protecting and promoting the constitutional rights, equality and dignity of 31 million Nigerians with Disabilities, 15 million Almajiris, millions of Internally Displaced Persons (IDP) and retired older Nigerians.

“President Buhari, ended our long journey of over twenty years, faced by a lot of permanent man-made barriers placed on our rough ways to successfully, advocate and negotiate with the Nigerian Government to enact, vote and pass into law, a Nigerians with Disabilities Rights Bill with a Commission. And we congratulate those selected as members of the governing council for the Commission.

“Buhari granted our multiple official requests and demands to establish a Commission, under the UN CRPD and the new disabilities Rights Law, by approving and announcing the names of the governing council for an independent, Implementation, Commission for the Discrimination Against Persons with Disabilities (Prohibition) Act 2018 (Nigerians with Disabilities Act (NDA)),” the group observed.

“Buhari assented into law, the Discrimination Against Persons with Disabilities Prohibition Act 2018, under Nigeria’s mandatory Obligations to fully implement the UN Convention on the Rights of Persons with Disabilities at its accompanying Optional Protocol, signed by President Olusegun Obasanjo, on March 30, 2007 and ratified by President Goodluck Jonathan on September 23, 2010.

“We thank and congratulate everybody, especially, the Americans with Disabilities Act (ADA), which we copied its successful model with little amendments to fit into our Nigerian different local contents and multi cultures, during every critical stage of our advocacy and negotiations with the Nigerian National Assembly and the successive administration that had reigned in the Nigerian Executive arm of government throughout the time of our struggle.