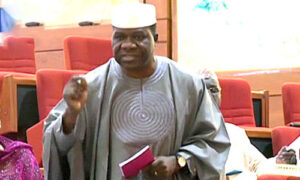 The Ekiti citizens’ hope of getting the expected dividends of democracy were further imbued on Monday, November 9, as the parliamentarian representing Ekiti Central Senatorial District in the Senate , Senator Opeyemi Bamidele, trained 200 youths to garner vocational and entrepreneurial knowledge to make them economically conscious and self dependent.

At the training ground in Aramoko, headquarters of Ekiti West Local Government area of the state, it was a general consensus among the participants, who were predominantly youthful women that there was need to embrace the emerging trends in the global economy, by keying into vocational and skills acquisition, rather than relying on white collar jobs, which are scarce and less lucrative .

The beneficiaries , drawn from Efon, Ijero and Ekiti West Local Governments, but converged on the Adeloye Hall in Aramoko Ekiti , were exposed to skills like: making of confectionaries, fashion designing, poultry production , soap production, tailoring and hair dressing.

The training was bankrolled by Senator Bamidele in partnership with Small and Medium Enterprises Development Agency of Nigeria (SMEDAN).

Speaking through his Senior Legislative Assistant, Mr. Bunmi Oguntuase, Bamidele urged the federal and government at all levels to tap into the vast youth potentials of the country for accelerated growth and development of the economy.

The Chairman, Senate Committee on Judiciary, Human Rights and Legal Matters, pointed out that Nigeria has one of the most productive youth population in Africa, whose mental and physical potentials can rejuvenate the economy and make it stronger, if harnessed .

Bamidele added that the current bedlam that resonated all over the country under the context of EndSARS protests had made it imperative for Nigerian leaders to design ways to make the youth economically relevant and include them in decision-making process .

He said: “Nigerian youth remain the greatest assets that can be deployed to rescue our nation from poverty, because they have the vitality, natural instruct,mentality and the right education to bring this to bare if well utilised.

“Though, I quite agreed with the fact that the youth had been neglected for long and there must be a paradigm shift whereby they will be taken as the cornerstone of our economy to stamp out restiveness and other vices in our clime.

“But the youth too must have a rethink because many of them were bungling the opportunities that come their ways,like the one we have been doing since I got to the National Assembly.

“Senator Bamidele wanted to take you off the streets, but are you ready? He has trained over 1,000 people in different vocational and entrepreneurial areas, but how many of them are practising what they have been trained for?

“Last year, we trained 120 persons in fishery and we empowered them with fingerlings and money to start off. But when we went out to monitor, only 20 people were doing the trade with 100 selling off their start off kits. This was highly demoralising but we will continue to do our best .

“Ensuring that poverty becomes alleviated among the ranks of our citizens is the duty of all of us, so we will be weary to discharge our duties as the representative of the people.

“So, Senator Bamidele appealed to you to be serious with this training . If you are trained and given the start off kits, make good use of it. Has a great vision within you that you will be successful and within the shortest possible time, your lives will be better”.

One of the trainers , Mr. Sanni Akanni advised that ideas in the facets of vocational and skills knowledge as well as entrepreneurial knack now rule the world, advising that knowledge gained through this programme can stand the test of time, if the participants take the training serious.

He stated that he quite appreciate the concept that the trainees won’t be abandoned to their own fate after training with Senator Bamidele’s preparedness to providing money and other kits to start off, describing this as a gesture that would spur the participants into action and make them embrace the dream.

“Before you can succeed in businesses, you must have the vision. If you are given the entire money in this world, once the interest and vision are not there, failure would come .

“But if you are given a token to start off grant and you dream big, success will be yours, because you will be ready to surmount all obstacles to rise to the top.

“One fact that remains incontestable now is that, skills and entrepreneurship now rule the world”.

Admonishing the trainees on the need to have great passion for the training, the Vice Chairman of Ekiti West Local Government, Alhaja Motunrayo Adesina, appealed to that they should see the training as an opportunity to uplift their lives, saying they can easily become employers of labour with great dream and vision attached to it.

“I am particularly happy because most of the beneficiaries are women. Women are the most hard hit when it comes to Poverty in Nigeria, Ekiti inclusive.

“This confirmed that the APC government is passionate about women because this programme is also complementing the human development policy of Governor Kayode Fayemi led administration”.

Declaring the programme open, the All Progressives Congress Ekiti Central Senatorial Chairman, Hon. jekoyemi Bankole, said Senator Bamidele has been a worthy Ambassador of the State who is incurably committed to alleviating the poverty index through life-changing programmes.

Bankole added that the best way to appreciate the Senator is for trainees to put what they have acquired into practice to make them productive in building a virile economy in Ekiti.

“Don’t see this as something very small, you can become bigger. People are talking about diversification of the economy, this can only happen when you acquire skills and become entrepreneurially savvy, so that you can stand on your own.

“It is no longer fashionable for people to be running around for white collar jobs. They are no longer easy to get. Rather than wasting away, key into this programme and you can become a reference point in future”.