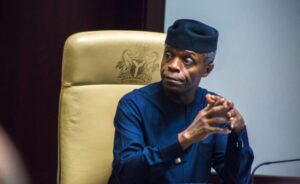 Vice President Yemi Osinbajo has hailed the courage of the founding fathers of the Nigerian media, describing them as the fulcrum of the nation’s nationalist struggle.

Osinbajo, who stated this yesterday in Lagos at the launch of ‘The Making of The Nigerian Flagship: A Story of The Guardian,’ written by Aaron Ukodie and O’Seun Ogunseitan, said the founding fathers of the Nigerian press were “instrumental to the birthing of Nigeria.”

It was a moment of reunion for many who passed out of The Guardian ‘journalism school,’ the Flagship, as they converged at the event.

Others are: Mr. Lade Bonuola and a host of old associates like Mr. Ted Iwere; Senator Ayogu Eze; and the Lagos State Commissioner for Information, Mr. Gbenga Omotosho, who all added charm to the four-hour occasion.

It was really an afternoon of reminisces, as everyone that spoke took time to remember the pioneering days of The Guardian.

While pouring encomiums on The Guardian, Osinbajo said the story of the newspaper was significant, for the redefinition it meant for print media in Nigeria, and for its uniqueness in bringing public intellectuals and academics into journalism and breeding a generation of talented journalists.

He said the paper represented “the proud and illustrious tradition of the Nigerian press that practised journalism with a social mission and a commitment to speaking truth to power.

According to him, the paper played an important role in the struggle for Nigeria’s democracy, stressing that it suffered proscription and the fire-bombing of its business offices at Rutam House.

He said: “Alex Ibru, himself, narrowly survived an assassination attempt in which he was severely injured. Years later, I confronted the horror of the attack on him myself, when as Attorney General in Lagos, it was my lot to prosecute his assailants. It was a reflection of the terrible costs that journalists bore as they continued to heroically ply their craft as an act of resistance against tyranny.

“For decades, the men and women that work at The Guardian have drawn inspiration from the immortal words of Uthman Dan Fodio on its masthead: ‘Conscience is an open wound. Only truth can heal it.’

“It is the role of journalists, to tell the truth even when it is inconvenient. This mission has a special resonance in this day and age.”

He noted; “To grasp the significance of The Guardian, it is important to situate its odyssey within the larger Nigerian story and particularly in the context of the evolution of the fourth estate in our country.

“The Guardian is no longer just a newspaper house, but a public institution – one that has served as an exemplar and a model for generations of media practitioners who replicate its ethos and standards in different ways.”

The former Ogun State governor disclosed that he and the late Alex Ibru began the idea of The Guardian about 40 years ago, in Yaba.

Recounting the years of his association with the late Guardian founder, he described him as a deep intellectual in approach, adding that due to his ingenuity, The Guardian became the first paper with not just news but analysis, background to the news and commentaries.

“Ibru never interfered with the professionals in The Guardian. He tolerated what they wrote. He never dictated to the columnists,” Osoba said.

The publisher of The Guardian, while receiving the award given to her husband, reiterated the need for a true federalism, which has become a recurring feature of The Guardian editorials for some time now.

“We would like the president and his men and women to note that restructuring of the federation in the context of federalism is an idea whose time has come and no politics can repel that idea. That is why we have been committed to a weekly commentary on the front page of The Guardian on the issue.

“We do this every Thursday. As you may have seen, today is the 24th edition of our ‘federalism is the answer, after all’ serial. We would like our president to note that a return to true federalism will solve most of our security and economic challenges. It is not new,” she said.