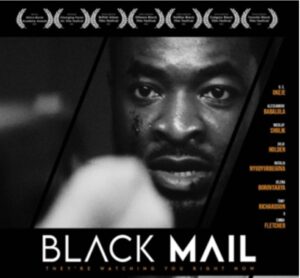 In an historic UK first for independent Black British cinema, BLACK MAIL will receive a UK-wide release across 100 cinema screens, making it the biggest ever release by an independently produced and distributed Black British film to date.

BLACK MAIL, directed, written, and produced by Obi Emelonye and shot in Russsian and English, is a poignant allegory for the present times, which sees a ruthless Russian criminal attempt to exploit a compromised victim in a game of cyber cat and mouse that takes everyone to the edge of destruction in this sharply observed thriller.

Obi Emelonye wants us to answer the question; How far would you go to keep your private life private? BLACK MAIL stars Nollywood leading actor O.C. Ukeje (Half of a Yellow Sun, Gone Too Far) as Ray Chinda, an actor and family man trying to stop a private video of himself from being leaked online before his professional and personal life are destroyed.

In this fast-moving thriller set in contemporary London, Ray Chinda is being blackmailed by a group of seemingly faceless internet criminals. His acting career has flourished and he wants to protect his legacy at all costs when hackers start demanding money in exchange for his private files. Realizing he only has twenty-four hours before he is exposed, Ray starts the fearless pursuit to stop them.

As Ray struggles to find the gang that is trying to extort him it becomes clear that he is unearthing a wide-scale plot involving an international crime lord. His wife Nikki is used to being in the public eye but Ray is convinced that whatever is in the files would be enough to cause her to leave him and take their children. Confiding in his manager Reuben (Alessandro Babalola; Wrath of Men, Top Boy) about the situation, Ray decides to take fate into his own hands and become someone he has only ever pretended to be in movies.

BLACK MAIL takes the audience on a compelling journey with a hero trying ardently to protect the life he has built and help others along the way, inspired by current issues with consent and the artist’s right to privacy.

Productions stills and the full list of cinemas screening Black Mail can be found here: www.blackmailmovie.com