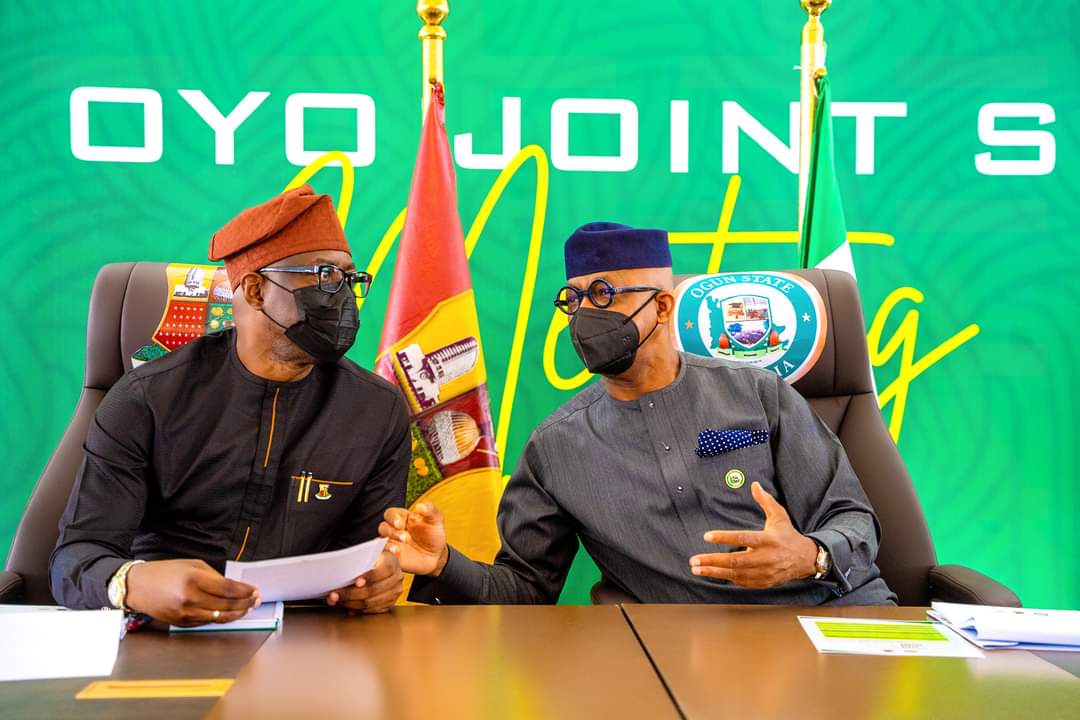 Governor of Oyo State, ‘Seyi Makinde has vowed to work hand in hand with his Ogun State counterpart, Prince Dapo Abiodun, to end banditry and kidnapping in boundaries shared by the two states, as the two states held an inaugural joint security meeting in Abeokuta, the Ogun State capital.

The two governors, who first spoke while flagging off the joint meeting,  emphasised the centrality of security to the achievement of socio-economic development.

Governor Makinde, while speaking at the meeting  held at the Presidential Lodge, Ibara, Abeokuta, Ogun State, maintained that the two states decided to initiate the collaborative effort because of the growing rate of crimes such as kidnapping and banditry.

A statement by the Chief Press Secretary to the governor of Oyo State,  Mr. Taiwo Adisa, quoted Governor Makinde as saying that “we came here to initiate a collaborative effort between our two states because it is the right thing to do and absolutely important we do it. In recent times, we have seen cases of kidnapping. So, if it is not a big concern to the leadership of the two states, then we won’t be here also with our service commanders because we have quite a bit to do.

“My brother and I have an absolute commitment to the security of lives and property within the two states. We have experiences across the states and what this meeting will do for us is to be able to share these experiences and look at those decisions we can take jointly to improve the security situation in our states.”

The statement maintained that at the end of the meeting, the two states resolved to tackle insecurity challenges including crimes such as kidnapping, banditry, fraud and ritual killings, among others, frontally by setting up a high-level joint security committee to oversee security matters along the boundary communities in the two states.

The meeting equally agreed to set up a Joint Border Security Task Force with membership drawn from various security agencies in each state, to patrol boundary communities and ensure security of lives and property for residents and commuters.

It equally resolved that members of the task force would be trained and oriented on the rule of engagement to prevent unwholesome practices, adding that collaboration on emergencies/distress calls on the highways in the two states, intelligence-gathering and sharing on security issues, and effective engagement and collaboration with all stakeholders including the Federal Government will also come with the joint security effort.

Speaking at the meeting, Governor Makinde, who maintained that he is a believer in structural reform in the security, politics and economy of the nation, commended Abiodun for the infrastructural drive that is connecting cities with the state.

He noted, however, that the two states and the South-West zone must begin to think about how to connect major cities across all the states so that the zone could become a corridor of development.

He said: “I am a believer of structural reform not just only in the security area but in our polity and economy. When I was coming and drove on that 44km road, the interchange, I told my brother that, yes, we are connecting cities within our state but we must now think beyond that. We must start thinking of how to connect major cities within our states so that when we look at the south-west zone, we see it as a corridor for development. He agreed with me 100 per cent because we have seen it in other places.

“I saw the estate midway between the interchange and here and people have already been moving in there. So, if one can stay there and work in Lagos or Ibadan or Abeokuta, that is how we create a development corridor. And then, there is a lot of nexus between crime and criminality and economic development. That is what we need to do, because a lot of youths will…That is the only way we can see a drop in criminal activities.

“I believe in state police but we are not able to get that at this point in time because of the constitutional hurdles we have to pass through. We all aligned to get the Amotekun in all the states in South-West and I am glad that Ogun State is now operationalising it.
“I am happy that this is not about partisan politics. My brother is from the APC and I am from PDP. We are having security issues along our common borders. We have had two PDP governors in this state and I did not see anywhere where they had this kind of collaboration.

Again, two APC governors were in both states and could not achieve anything. Today, we have APC and PDP governors and we are here to collaborate, and at the end of this Technical Session, what we hope to achieve is a long-lasting solution that will benefit the good people of both states.

“We won’t be able to do it without everyone that is in this room including the traditional rulers because in Oyo State, we did involuntary policing. We involved vigilantes, traditional institutions and that has helped us. So, we are here to share those ideas and I believe that we will come up with a communiqué, give our commitments to it and the entire generality of our people should be involved in it at the end of the day.

“This is two out of the 36 states in the country. When the two states become more peaceful, the other 34 states can take a cue from us.”

Similarly, the Ogun State Governor, Abiodun, said the joint security meeting is deepened in history, common heritage and cultural affinity, noting that the realisation of the need to put a stop to the recurring challenge of herders/farmers clashes, kidnapping and other nefarious activities around boundary communities in the two states, led to the institution of the collaborative effort.
Abiodun added: “This collaboration is peculiar not just because Oyo State is our neighbour, but the largest by land mass of the six South- Western States and the political capital of the Zone. Thus, whatever happens in Oyo State could easily have ripple effects on the other five States.

“No doubt, each of our two states has its peculiar security challenges which the respective State Governments have been tackling through internal security architecture.
“We appreciate the fact that there is no way development in one of our two states will not have a spiral effect on the other state, especially through our border communities.

“We must jointly and quickly find ways to cooperate, collaborate and find solutions to the various security challenges in these communities. This is why today’s bilateral meeting is very timely.

“With this partnership, between our two states, an enduring peace and security that will promote sustainable economic development that will engender individual prosperity of both our people in Ogun and Oyo States.”

A communique issued at the end of the joint security meeting and signed by the duo of Makinde and Abiodun indicated that the joint security was at the instance of the two governors and that it was convened to discuss common issues affecting the safety of lives and properties in the neighbouring states.
The communique read in part: “Whilst noting and commending existing measures put in place by the two Governors to eradicate or at least minimise crimes and ensure peace and safety of lives and property in their respective states, the meeting, noted that the shared objective of ensuring peace and security is being undermined by the criminal activities in the communities along the common boundaries of Ogun and Oyo states.

“The meeting agreed to implement the following initiatives in the short term; threat assessment and analysis along the border corridors; deployment of CCTV on the interstate highways; harmonisation and mainstreaming of voluntary police and informal security outfits; timeous and diligent prosecution of criminals to signify the resolve of the governments of both states to clamp down on criminality.”

Top functionaries from the Oyo State government, who attended the joint security meeting with Governor Makinde, were the Chief of Staff, Hon. Segun Ogunwuyi, Attorney-General and Commissioner for Justice, Prof. Oyelowo Oyewo, Commissioner for Local Government and Chieftaincy Matters, Chief Bayo Lawal and the Special Adviser to Governor Makinde on Security, Retired CP Fatai Owoseni, among others.