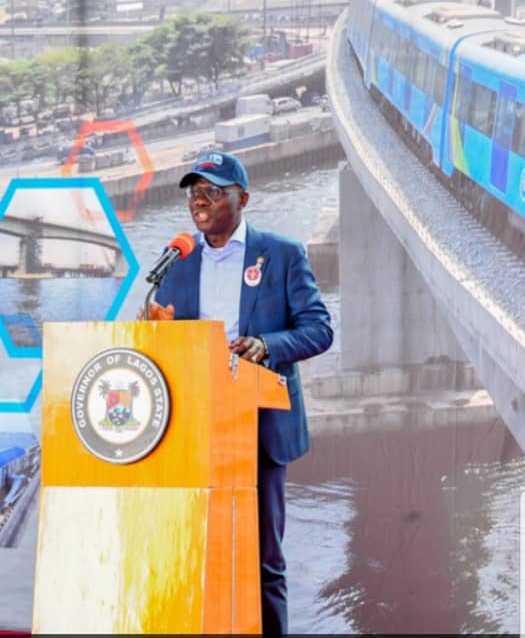 Exactly 1:31pm on Wednesday, history was recorded in Lagos State. Governor Babajide Sanwo-Olu formally stepped into the coach of the newly completed Lagos Blue Line and took the first trip aboard the electric-powered rail infrastructure.

The Governor led his Deputy, Dr. Obafemi Hamzat, Speaker, Lagos State House of Assembly, Rt Hon Mudashiru Obasa, members of the State cabinet, reporters and members of the public on a ride from the National Theatre Station to the iconic station in Marina.

For the first time, a rail infrastructure traverses the western part of the State and the Lagos Island. The first passenger trip marked the completion of civil infrastructure work on the Lagos Rail Mass Transit (LRMT) being constructed by Lagos Metropolitan Area Transport Authority (LAMATA).

The completed tracks, spanning 13 kilometres in the first phase, extend from Mile 2 to Marina, covering five stations. The construction started in 2010 under the administration of Governor Babatunde Raji Fashola. It experienced some delays in the succeeding administration, before the current Government continued from 2019.

Sanwo-Olu, who could not hide his excitement about the development, declared the end of construction on the Blue Rail Line project, keeping to the December 2022 deadline. The rail infrastructure, he said, is now ready for commissioning in January by President Muhammadu Buhari.

The Governor said the milestone was a culmination of “impactful reforms” initiated in the State’s transport ecosystem, which started at the beginning of the fourth republic under the administration of his predecessor, Asiwaju Bola Ahmed Tinubu.

Sanwo-Olu described the moment as “historic”, saying Lagos became the first sub-national Government in Africa to fund and deliver a rail system from the State’s balance sheet. The Governor said the construction of the second phase of the Blue Line rail project, which covers 14-kilometre from Mile 2 to Okokomaiko, will be launched immediately after the completion and inauguration of the first phase next month.

He said: “The completion of the infrastructure for the first phase of the Lagos Blue Line rail is a strong testimony of our commitment to building on the legacies of past administrations, and the pioneering vision of Asiwaju Bola Ahmed Tinubu. This milestone in the development of the Lagos Rail Mass Transit (LRMT) is the culmination of several impactful reforms in the transport ecosystem of Lagos, starting in 1999.

“The Tinubu administration developed the Strategic Transport Master Plan (STMP), which laid out the foundation for a network of robust and modern transport infrastructure befitting the 21st century city. The master plan has six rail lines and one monorail, 14 Bus Rapid Transit (BRT) corridors, over 20 water routes and a number of major new roads. Central to the implementation of the transport master plan is LAMATA established in 2002.

“Over the last two decades, that masterplan has been faithfully implemented by successive administrations. Today, we are making history with the completion of historic rail line, which is the first phase of the Blue Line. The road to the completion of this project, no doubt, has had an interesting story of delays, which were not due to a lack of enthusiasm or commitment on the part of the State Government. Now, we have put the challenges behind us; from now on, we will focus on the benefits of this project for our people.”

After commissioning, Sanwo-Olu said passenger operations would not commence until the project undergoes necessary test-running and proper security measures are put in place along the rail corridor.

The Governor said the State had already taken the delivery of the three set of wagons that would be used for passenger operations. The completed rail infrastructure, he said, has the capacity to move 250,000 passengers daily. When the second phase is completed, he said the entire project would take 500,000 people daily.

Sanwo-Olu said his administration’s vision for an integrated transport system, as enunciated in the T.H.E.M.E.S agenda, was beginning to be a reality, stressing that the transportation plan of his Government was a multimodal approach that would bring road, rail, and waterways together for seamless mobility.

The Governor acknowledged the effort of his predecessor, ex-Governor Fashola, toward bringing the vision to life. He also thanked the leadership of the Central Bank of Nigeria allowing Lagos access its differentiated cash reserves, which was disbursed through three financial institutions – Access Bank, Sterling Bank and Fidelity Bank – that created innovative funding model for the Blue Line project.

He said: “To the good people of Lagos, this project is for you and your families. It is about your livelihood and sustenance. We promised to make your life better by this project, which will help you to commute from one part of the city to another in a safe and secure manner. We gave you this commitment and now, we have kept our promises.

“We thank you for your patience and for bearing with us in the face of all the inconveniences thrown up by the implementation of the Light Rail network. This project is for you; ensure you safeguard it. Bear in mind that this rail system is powered by electricity; there must not be a trespass on it in any way. Crossing the tracks is no longer an option. Anyone who attempts vandalism on the track put his life at great risk. Pedestrian bridges have been provided to enable pedestrian crossings.”

The completion of the rail infrastructure, she said, manifested the audacious mind of the Governor, stressing that the development signified the importance the Sanwo-Olu administration accorded to the delivery of integrated transportation system for the State and traffic management.

Akinajo said the Blue Line is one of the Line six rail lines articulated in the State’s Strategic Transportation Master Plan, noting that the construction was funded from the State’s Internally Generated Revenue (IGR). This, she said, is unprecedented in the history of rail construction across the world.

She said: “Construction of the Blue Line has been one of the most challenging projects undertaken by Lagos Government, given many hitches that had to be overcome. To get to the point of completion, we have had disturbances and delays in the relocation of submarine cables, gas pipelines and removal of shipwrecks. This made the construction of submarine pillar extremely difficult.

“Today, the story has changed. We are taking the first ride in the train, which marks the beginning of our testing phases for the Blue Line. Passengers will use the State’s unified electronic payment system known as Cowry card currently being used for BRT and regulated ferry services. The completion of civil infrastructure work is the manifestation of the audacious mind and courage of the Governor.”

Commissioner for Transportation, Dr. Frederic Oladeinde said the development attested to the Governor’s passion to change the transportation narrative of the State and ensure rapid mobility in Lagos.

The rail project, the Commissioner said, will enhance rapidity in movement and unlock more economic prosperity for the State.

“Lagosians now trust you because you are a man of your word and integrity. Mr. Governor, you will be remembered for the commitment you deployed to ensure this infrastructure is completed and becomes a reality,” Oladeinde said.

Chairman of China Civil Engineering Construction Company (CCECC), Mr. Zhang Zhichen, said the project was delivered with standard and quality, noting that completion of the Blue Line would write a new chapter for mass transportation in Lagos.