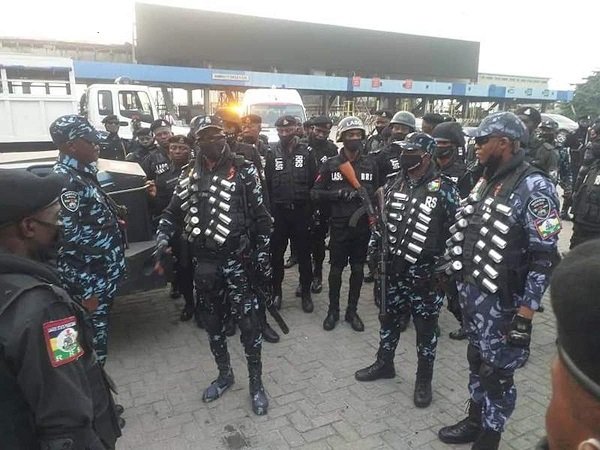 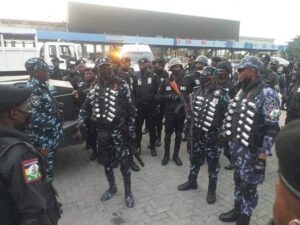 The Lagos State Police command made good of its promise to prevent the another round of protest at the Lekki Toll Gate in Lagos State.

The Police and Lagos State Government have earlier issued warning to the organisers of the February 13 protest to desist from the planned protest.

About 28 people, including those who claimed to be passersby were arrested at Lekki toll gate as at the time this report was filed.

Despite the heavy presence of police officers at Lekki Tollgate on Saturday, some protesters have continued to express displeasure over the reopening of Lekki Tollgate.

It was a struggle for the scores of police officers drafted to the toll gate as they struggled to arrest protesters who show up in twos and threes on different occasions.

The officers, however, could not prevent some of the protesters, who had been locked in a Black Maria, from airing their resentments.

An order to reopen the Lekki toll gate by the Lagos Judicial Panel of Inquiry last Saturday spurred the #occupyLekkitollgate movement, with the youth rising to resist the reopening.

The youth argued that the reopening of the tollgate is premature as the investigation into the Lekki shooting incident of October 20, 2020, has not been concluded.

The Lekki toll plaza, which has not been operational since the commencement of #EndSARS protest, was completely shut down on night of October 20, 2020, following the shooting of unarmed protesters by officers of the Nigerian army.

In response to #occupyLekkitollgate, some other youth vowed to #DefendLagos, in opposition of the planned protest.

This gave birth to a protest and counter-protest scheduled to hold at Lekki toll gate at 7 a.m. on Saturday.

Several pleas and warnings have been issued by the police, state government, the LCC and other parties, calling on youth not to go ahead with the protest and counter-protest.

Lekki tollgate, which is operated by the Lekki Concession Company, has since Friday been under the protection of police officers, who were drafted there to foil the protests.

Scores of police officers had been at the Lekki tollgate since Friday, to forestall any protest.

At the Lekki Toll Gate Saturday morning officers were holding morning briefings at different spots ahead of the protest.

No movement of protesters was observed at the tollgate until 7:47 a.m. when some police officers began rushing into their vehicles and heading towards Lekki Phase 1.

Shortly after, few protesters approached the toll gate on foot, with police officers behind them, dragging them into the Black Maria belonging to the LCC.

About 13 protesters were arrested and driven to an unknown location in the first set of arrests.

A vehicle conveying a speaker, sound system, generator and some protest material was also impounded.

After the first wave of arrests, other protesters strolled to the Lekki tollgate in twos and threes, with some insisting on exercising their right to protest.

The police officers and security personnel of the LCC also went to nearby streets to arrest people seen, questioning their presence around the tollgate.

Several arrests were made by the police, comprising people who showed up for the protest and those who claim they were merely passing by.

On Saturday, a group, the Youth Rights Campaign, called for the release of all protesters that were arrested at the tollgate.

In a statement, the group demanded the immediate and unconditional release of one of its members, Moshood Oshufunrewa, and other activists arrested at the tollgate.

“We affirm that peaceful protest is a right which cannot be undermined or abridged under any pretext. The actions of the Police today presents an escalation of the developing civilian capitalist dictatorship which the APC regime is slowly but surely morphing into,” the group said.

As at the time of this report, more police officers, led by Yinka Egbeyemi, the RRS commander, have arrived at the Lekki tollgate.

Meanwhile , Nigerians in diaspora has equally appealed to the organisers of the protest to suspend their action in order not to add to the existing social economy tension in the Country.