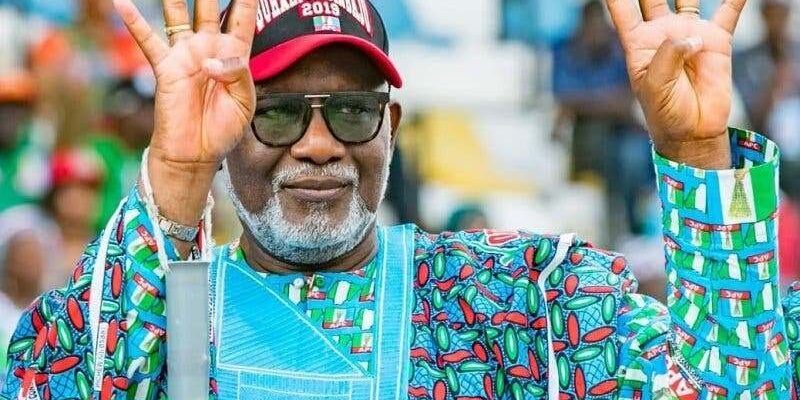 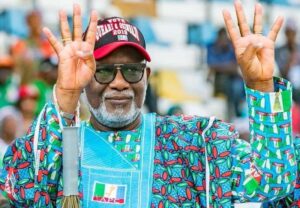 President Buhari, Vice President Osinbajo and APC Governors while speaking during the campaign rally, unanimously endorsed Governor Akeredolu and his running mate, Hon. Lucky Aiyedatiwa and urged the people of Ondo State to vote for APC to ensure continuity of lofty projects embarked upon by the APC-led administration in the State.

President Buhari who addressed the crowd at the stadium via a recorded message, declared that Governor Akeredolu deserved to be re-elected to consolidate what he had done in his first term.

He said: “I have no doubt that our candidate is a good brand for APC to market. I am particularly delighted by his original approach to governance.

“His performance within the limit of available resources is endearing. He has taken the state to a new level and on the path of prosperity.

“Having had the privilege of commissioning some of the projects executed by his administration, which are endearing, I join here today to declare that Governor Akeredolu deserves to be re-elected to consolidate what he had done in his first term.

“I am not just proud of his achievements, I am confident that he deserves the mandate of the people of Ondo State for the second term.”

President Buhari while emphasising on his administration’s commitment to credible and transparent election in Nigeria, said “as a government, necessary measures would be put in place to ensure that the election is peaceful, transparent and credible. Adequate security would be provided to forestall any bridge of peace by destructive elements.

“The good people of Ondo State, while I urge you all to turn out in your numbers to vote without fears or molestation, it is my hope that you will do this in accordance to the laws guiding the electoral process.

Also addressing the crowd via a recorded message, Prof. Osinbajo said Governor Akeredolu-led APC administration’s achievements are visible in all the nooks and crannies of Ondo State.

He specifically commended Governor Akeredolu for prompt payment of salaries of civil servants and construction of about 800 primary and secondary schools across the state, as well as providing infrastructure and roads in different parts of the state, especially the Ore flyover bridge, Ijoka Road to Igbara.

He said: “I do not claim to know more than you about the development in the State, you know best. But I will like to mention a few things you know about the achievements of the administration of Governor Oluwarotimi Akeredolu (SAN).

“I want to call on traditional rulers, chiefs, elderly, market leaders, traders, teachers, students, civil servants and artisans to vote for a politician with integrity, Arakunrin Oluwarotimi Akeredolu for continuity of good governance and provision of infrastructure, development and growth of Ondo State. Vote for APC on Saturday.”

In his goodwill message, Governor Sanwo-Olu appealed to the people of Ondo State to vote for Akeredolu for him to be able to complete the good work he has started in the state.

He said: “You have all seen the good works of Akeredolu in Ondo State. So, I want to appeal that you should allow him to go for another term.