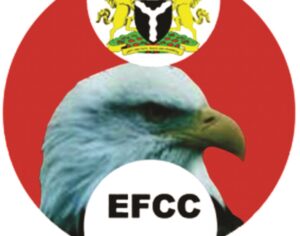 The Economic and Financial Crimes Commission has asked the Court of Appeal in Lagos to list Mohammed Yunusa, a Federal High Court judge recently discharged of bribery charges, for retrial.

It made the prayer in a February 2, 2020 notice of appeal sighted by our correspondent on Wednesday.

An Ikeja High Court had in a ruling on January 25 discharged Yunusa of the bribery charges, citing a December 23, 2020 letter by the National Judicial Council which lifted the suspension slammed on him in July 2016.

Before the ruling, EFCC prosecutor, Wahab Shittu, had called 10 prosecution witnesses with only about two more to be presented, when the court struck out Mr Yunusa’s name off the charges, and ordered his alleged co-accomplice, Esther Agbo, to continue facing the trial.

Dissatisfied, the EFCC raised three grounds of appeal in the notice of appeal.

“An order directing the trial court to relist and restore the name of the 1st respondent as the 1st defendant in the Information before the trial court.”

The anti-graft agency said the trial judge’s ruling attempted to confer immunity on Yunusa as a judicial officer even when the Nigerian Constitution does not grant such immunity to judges.

Shittu, who filed the appeal, quoted the trial judge as saying in her ruling, “Upon the application of the learned silk, J. A Odubela, SAN, and the document tendered admitted and marked as Exhibit A2, the 1st defendant having been recalled on the recommendation of the National Judicial Council is a sitting judicial officer of the federation, hence immune from criminal proceedings.”

Faulting the ruling, Shittu argued that section 308 of the Nigerian Constitution confers immunity from criminal prosecution on only serving President, Vice- President, as well as governors and deputy governors of state, and not on any other persons or authorities.

He added that section 153(1), paragraph 21(b) of Part 1 of the Third Schedule of the Nigerian Constitution “does not give rise to the interpretation that a criminal allegation against a judge must be first disposed of by the National Judicial Council (NJC) before criminal proceedings against a judicial officer can be initiated by the state.”

In another ground of appeal, the EFCC argued that “the trial court erred in law and misdirected itself in the interpretation of the decision in Nganjiwa vs FRN (“017 LPELR 43391CA.”

In the case referred to, the Court of Appeal had in 2017 ruled that a judge of the Federal High Court, Hyeladzira Nganjiwa, could not be prosecuted unless he was first disciplined by the NJC.

But Shittu, in faulting the discharge of Mr Yunusa, noted that his trial commenced after a case against him had been referred to the NJC.

He argued that the Nganjiwa vs FRN case “did not decide that a matter determined by the NJC one way or the other cannot be subject to subsequent criminal proceedings against the serving judge in respect of alleged criminal offences.”

“Constitutional powers assigned to the National Judicial Council and law enforcement agencies are distinct and separate and the exercise of any of such powers is not dependent on the other.

“National Judicial Council is constitutionally vested with administrative and disciplinary jurisdictional powers against judicial officers while law enforcement agencies are vested with investigative and prosecutorial powers for criminal offences.”

He argued that “the trial judge erred in law in holding that, ‘consequently, the case against the 1st defendant (Mr Yunusa) is hereby struck out and he is accordingly discharged.”