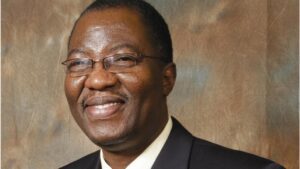 Last Tuesday’s defection of former governor of Ogun State, Chief Gbenga Daniel, from the Peoples Democratic Party (PDP) to the All Progressives Congress (APC) has been described as a boost to the latter’s chances of returning to power in 2023.

This was disclosed to THISDAY by a chieftain APC in Ogun State, Prince ‘Tope Armstrong Akintunde.

Akintunde, who is the Chief Executive Officer of Aerofield Homes, a property development concern, said that the former two-term governor remained an invaluable asset to the ruling party, both in Nigeria and in Ogun State.

He equally commended the Vice President, Prof Yemi Osinbajo, for returning to his roots, Ikenne Remo, in Ikenne Local Government area of Ogun State, to revalidate his APC membership.

According to him, this was not only a major achievement for the party but also a great effort to further strengthen the ruling party in the state.

Akintunde, who reckoned that Daniel is a former national leader of the PDP, said his coming to the APC “looks good to see our party through in the 2023 general elections, especially for the Presidency.”

“In the same vein, with Otunba Daniel’s defection, the good government of Prince Dapo Abiodun, with the purposeful leadership of Chief Yemi Sanusi-led Caretaker Committee of the APC, has just succeeded in uprooting the opposition elements in Ogun State”.

Speaking further on the defection of OGD as the former governor is fondly called, Akintunde said “it’s obvious that the defection of the calibre of someone of Otunba Gbenga Daniel’s towering status politically into our great party is really a great catch, really too good to be true”.

“Here is a man to first serve twice as the governor of the state with a lot of achievements in poverty alleviation, youth empowerment and employment, massive rural development across the 20 local governments, opening up of the state for serious economic prosperity, among others.

“Ten years after leaving office, people are still talking about his legacies.

“He is definitely coming to add a lot of values to our great party as well as the government of Prince Dapo Abiodun that has remained committed to making life a lot easier for everyone in Ogun State.

“This is also in addition to our Vice President, Prof Yemi Osinbajo who returned home last week to revalidate his party membership, Ogun APC is indeed poised for the next level,” Akintunde eulogised.

Meanwhile, an exultant Daniel validated his APC membership at his Sagamu countryhome on Thursday.

On Tuesday he had been officially received into the APC at his Asoludero residence, Sagamu, by Governor Abiodun and his fellow governors namely Rotimi Akeredolu of Ondo, Atiku Bagudu of Kebbi, Abdullahi Ganduje of Kano and Abubakar Bello of Niger State.

The ward chairman, Mr. Suji Olusegun, the chairman APC Revalidation/Registration Committee, Mr. Ademorin Kuye; a former chairman of the local government, Mr. Funmi Efuape, among others, were present on the occasion.