Those calling for probe of ex-service chiefs unpatriotic –Lai Mohammed 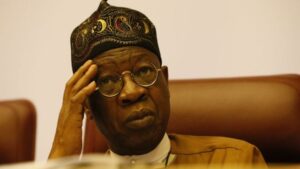 Minister of Information and Culture, Lai Mohammed, has described as unpatriotic, Nigerians calling for the International Criminal Court to probe the immediate-past service chiefs.

Mohammed spoke on Tuesday during a Radio Nigeria programme, Politics Nationwide, monitored by the news team

The news team had reported that the President, Major General Muhammadu Buhari (retd.), appointed four new service chiefs last week after much clamour from Nigerians that he bring in fresh hands to pilot the country’s anti-terrorism war.

But the Peoples Democratic Party and some other Nigerians have since demanded the probe of the Olonisakin, Buratai, Ibas and Abubakar to unravel circumstances behind the security lapses during their tenure.

Reacting on Tuesday, the minister said, “To the best of my knowledge, our service chiefs obey the rules of engagement and where there are infractions, there are internal regulations and internal mechanisms to address them.

“Those who are calling for the ex-service chiefs to be invited to ICC are unpatriotic people.”

Mohammed also said civilians are not competent to talk on military structure and formations, whether in the North-Eastern states of Borno, Yobe and Adamawa or in any other parts of the country.

The minister, however, assured Nigerians that the new service chiefs have hit the ground running and would ensure Nigeria overcome the insurgency war in the North-East and in other parts of the country.

For over 10 years, the Boko Haram terror group had killed hundreds of Nigerians in the North-East. The sect had also burnt down and bombed scores of villages as well as churches. The Nigerian Army and the Presidency had at several times claimed the group had been ‘technically defeated’ and ‘weakened’ but the Abubakar Shekau’s bloodthirsty faction continues to strike with daring effrontery and crude savagery.