The State of the African Diaspora is pleased to announce the appointment of Bertin Amissale as Chancellor of the SOAD Royal Chamber. 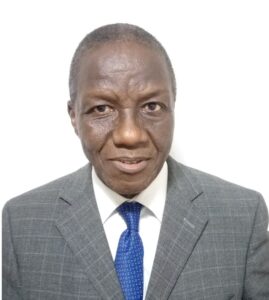 Introduced by Ambassador Goprou, Bertin Amissale, was also appointed Ambassador in August 2021. Since then, he has continuously been involved in the activities of the State of the African Diaspora (SOAD). Having been a University English Professor in Ivory Coast, he has often been a bridge between the French and English speaking communities within our State.

Within the SOAD Royal Chamber, he has already successfully accomplished several important missions. He has invited more than forty Traditional Chiefs to sit in the Chamber, and he has played an important role in the signing of several cooperation agreements. It is therefore only natural that Queen Aïdji, Co-President of the Royal Chamber, appointed him to the position of Chancellor.  Speaking about him, she said:

“I would like to very solemnly say thank you to His Excellency Louis-Georges Tin, Prime Minister of the State of the African Diaspora, and to Her Majesty Queen Aidji, for this mark of confidence and this appointment as Chancellor. I am aware of the burden that this represents. I would like to reassure them of my commitment and my determination to carry out my mission with abnegation and loyalty. Together, with the help of each and everyone, we will succeed. »

RAIL MASS TRANSIT: LASG DIVERTS TRAFFIC AT MURTALA MUHAMMED WAY /YABA AXIS
Previous Post
NIPC in search of N298.3trn to make up N348.7trn to fund NDP
Next Post
You May Also Like