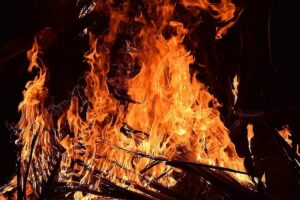 An early Thursday morning fire outbreak at the Tipper Market 3rd Avenue, Gwarimpa, Abuja has claimed six lives, while many others are injured.

Goods worth millions of Naira were also lost to the fire.

The inferno, which lasted for over two hours before it was put out by the men of the FCT Fire Service, was said to have resulted from a faulty electrical spark in one of the locked up shops.

Many houses around the market were also affected by the fire, while the residents of nearby War College Estate, stayed awake throughout the night.

Those who died were said to be shop owners who usually slept over in their shops. They were said to have been overpowered by the smoke that engulfed their stalls.

Their burnt bodies were later evacuated to the morgue, while the sixth victim was said to be charred beyond recognition. Those who sustained various degrees of injuries were rushed to the hospital. Some hoodlums also took advantage of the incident to loot from vandalized shops. Firefighters were reportedly mobilised after the hoodlums carried out their nefarious activities.

An eyewitness, Mrs Dupe Karim said the fire burned for about two hours before fire fighters arrived the scene. She said they were awoken by the odor of smoke and the ball of fire from the affected market.

“We were all helpless and could not do anything. For over two hours, firefighters didn’t come to the scene. Six people had already been burnt to death before they arrived. Some of the shop owners usually sleep in the market. So, they were trapped in their shops. Many people lost their goods. The corpses have been evacuated and the fire put out. It was caused by a spark in one of the shops. It is an unfortunate situation,” she said.