………….
Late Chief Nathaniel Ilesanmi Omosehin, the father  of the Billionaire Gold magnate, Bamidele Omosehin was buried amidst pump and fanfare on Wednesday, 23rd December, 2020 at Iju Odo, his country home. The funeral programme which held at St. Paul’s Anglican Church, Iju Odo attracted dignitaries and thespians from Nollywood, the mainstay of the Nigerian Movie industry.
The calm and serene Iju Odo community also played host to notable politician and entertainment enthusiast, Hon. Shina Peller, Member House of Representatives from Iseyin/Itesiwaju/ Irepodun Federal Constituency, Oyo state. Hon. Peller, whose support for tourism and interest in the hospitality industry in Nigeria is second to none led the pack of captains of industry in Nigeria who are friends of Mr. Bamidele Omehinsehin to the event.
While delivering his sermon at the funeral programme, the Vicar/ Archdeacon, Iju Odo Archdeaconry , The Ven. Ogunfeyimi admonished  Christians to always remember that death when it occurs should present an opportunity for those who have the grace to still be alive to critically evaluate their lives, noting that God is calling us all to self examine our lives because as the sage lay mortal today, so shall we all lay mortal when the final call comes for us, therefore burial while it marks the end of time for the deceased should make us alive to check our pulse and prepare our ways so that we all can make peace with our creator.
Thanksgiving was held for the life and time of Pa. Omosehin who reached the mile Stone age of 100 years on this plain before he went to be with the Lord.
The right of committal for Pa. Omosehin was performed at his 8, Modupe Street residence Iju Odo after which a grand reception and a high octane party followed at the field of Manuwa Memorial College Iju Odo.
The grand reception which actually electrified the calm Iju Odo country home of Bamidele Omehinsehin would be a talk of the town for a long time as the party had in attendance the who is who in the Nigerian entertainment circle as well as big boys business tycoons within and beyond Nigeria.
The Kwam 1 archetype from lbadan, David Ayinde sizzled the atmosphere with quality Fuji blend of music that kept the guests entertained all through the reception.
In an exclusive chat with Bamidele Omehinsehin at the event, he said his father was a great man who will be sorely missed by himself, his siblings, the entire family and the community, noting that his father was a stabilizing community stakeholder in his life time. He said his father’s advice and prayers worked for him and his memory will continue to linger in his mind. Also speaking about the deceased, the Oniju of Iju Odo, His Royal Highness, Oba Festus Olumoyegun described Late Pa. Omosehin as a kind man , a good Christian and one of the few whose words of advice count in the community. Oba Olumoyegun noted that Pa. Omosehin contributed immensely to the success of his becoming the Oniju of Iju Odo and was never found wanting as a community leader in his life time.
Earlier on Tuesday, Bamidele Omehinsehin had launched a foundation to provide aids and succor for the less privileged tagged Bamidele Omehinsehin Foundation (BOF). The final of a novelty tournament equally organised in loving memory of his father also held on Tuesday. Dele Omosehin at the inauguration of the foundation had said his desire to reach out to the poor, the brilliant but indigent children of schooling age and the orphans motivated him to establish the foundation as a means through which these less privileged ones can have their education updated without having to encounter financial hiccups and securing their future. His friend and soul mate, Hon Shina Peller who chaired the occasion donated one million Naira at the launching of BOF.
The party had in attendance the Oniju of Iju Odo, Oba Festus Olumoyegun,  Hon. Shina Peller, Hon. White, thespians and movers of Nollywood such as the screen goddess, Fathia Balogun, Remi Surutu, Sikirat Sindodo among others.
Chief Nathaniel Ilesanmi Omosehin was born in 1929 to Chief and  Mrs.Omosehin , the Lisa of Osooro land. Late Pa Omosehin was the last child of his mother. In his life time, Late Pa Omosehin founded ‘ Omosehin All Stars Band” and made a success of his musical career, producing hit records in the 70s. 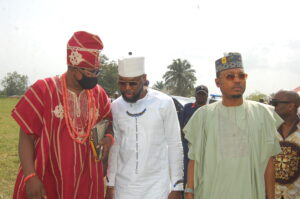 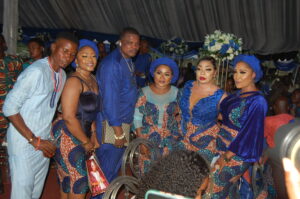 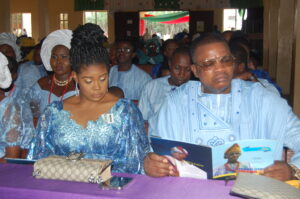