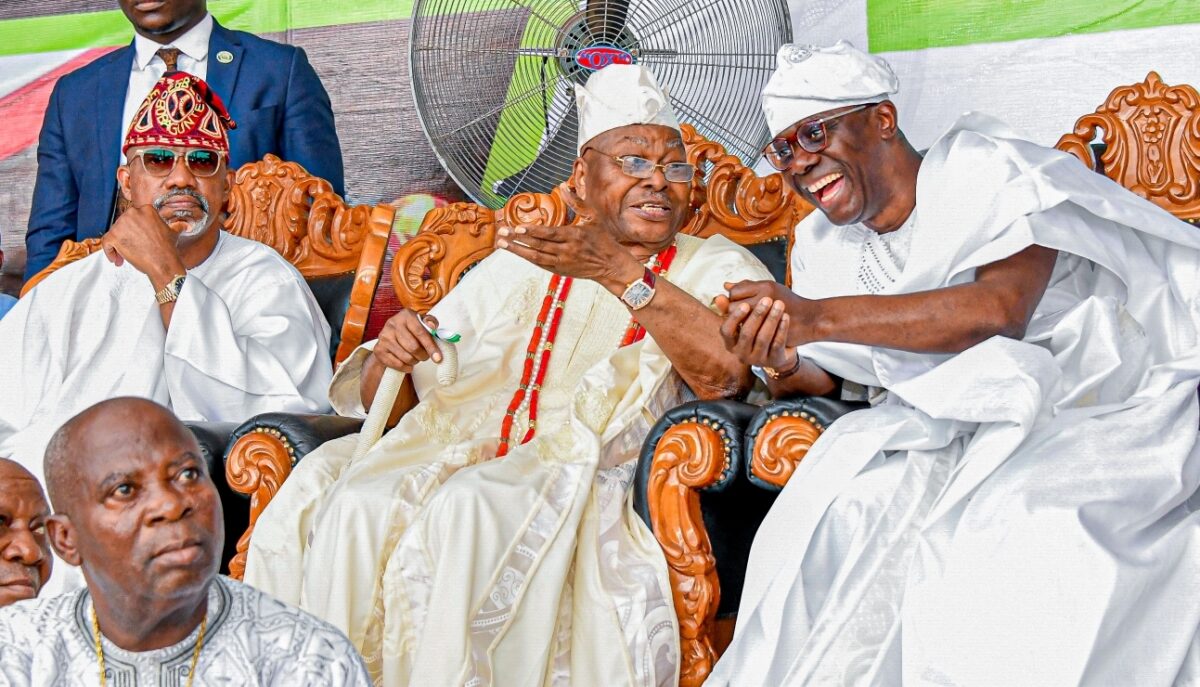 …Why Lagos Governor Was Invited, By Awujale

Sanwo-Olu was the special guest of honour.
The palace of Awujale, the paramount traditional ruler of Ijebu kingdom, came alive with ceremonial parades of colourful Aso Ebi. Indigenes, attired in beaded materials, led processions in batches to pay homage to the king – Alayeluwa Sikiru Adetona.

After the rite, they filed into the Royal Arcade in front of the palace to settle for the elaborate ceremony.

Sanwo-Olu’s entry into the arena literally moved the crowd of revelers into an outburst of excitement, lighting up the event as he stopped at each gallery to greet the Councils of Regberegbe (social clubs of Ijebu descendants).

The centuries-old festival has become the heritage of the Ijebu and has its roots in Islamic celebration of Eid-el Adha in which early Muslim reverts in the town converged on the Awujale palace on the third day to feast with the monarch.

The festival did not hold for two years, following the outbreak and spread of Coronavirus (COVID-19) pandemic in 2020.

Sanwo-Olu said the Ojude Oba Festival had stayed true to its Islamic roots and had become a unifying occasion for people, regardless of their faiths, tribes and dialects.

Under the reign of Oba
Adetona, Lagos Governor said the festival had grown to become a global carnival recognised across the world by people of Yoruba origin.
Sanwo-Olu said: “The Ojude Oba Festival has, for ages, stayed true to its Islamic roots and has also expanded to become a unifying symbol and occasion for people of all faiths, tribes, and tongues; as well as a global celebration of Ijebu heritage and culture.

“We must never lose sight of this unifying element, at a time when the forces of division seem to be working so actively to undermine all that we cherish as a people. Celebrations like Ojude Oba remind us that evil will never triumph over good.”

Sanwo-Olu, who became the third sitting Lagos Governor to be invited to grace the Ojude Oba fiesta, said the festival had become an enduring platform fostering unity.

In the spirit of the unity for which the festival is reputed, Sanwo-Olu urged the entire Yoruba race to forge a common front in support of Tinubu, a Yoruba son and leading presidential candidate in the next year general election.

The Governor said the opportunity offered by the APC to Yoruba to produce the next president must not be allowed to slip away, noting that Tinubu had made several sacrifices to keep the Yoruba race relevant in the Nigerian project.

“As Asiwaju famously said, it is the turn of the Yoruba to produce the president. We need not waste this opportunity but to grab it and have our leader, who is a detribalised Nigerian, to lead the country. I urge all sons and daughters of Yoruba to come out in support of Tinubu to realise this ambition,” Sanwo-Olu said.

The Governor pointed out that his presence at the event underscored the partnership between Lagos and Ogun, which led to the establishment of Joint Development Commission in 2021 to collaborate on key areas of mutual benefit and development, while accelerating socio-economic growth for people.

He said: “The peoples of Lagos and Ogun share a long historical and cultural bond, shaped by the same forces and experiences, nourished by the same waterways, and living up to the same Omoluabi standards and ideals.

“The road network linking Ijebu-Ode, Epe and Lekki is yet another concrete manifestation of our collaboration. Ogun State has completed their own stretch, while we will complete our own end this year, opening up new commercial and logistics opportunities in that axis, and positively impacting the lives of our people.”

Gov. Abiodun praised Lagos for being a supportive neighbour, as he also used the occasion to admonish the youth against cultism and vices that could dent the image of Ogun State.

On why Sanwo-Olu was specially invited to grace the occasion, Oba Adetona, the 58th Awujale, said the Governor had become a shining star in the present class of public officers, distinguishing himself with service-centred leadership.

This, the monarch, said endeared Sanwo-Olu to the citizens beyond the boundaries of Lagos and established his name as a symbol of responsive governance in the country.