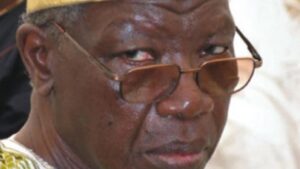 Jakande, a renowned journalist and elder statesman, who governed Lagos State during the aborted Second Republic between 1979 and 1983, died on Thursday at the age of 91.

Governor Sanwo-Olu, in a condolence message signed by his Chief Press Secretary, Mr. Gboyega Akosile, on Thursday said the late Jakande will remain one of the best public office holders in the political history of Nigeria based on how he transformed Lagos State and Nigeria during his tenure as Honourable Minister of Works.

The Governor said Alhaji Jakande popularly referred to as ‘Baba Kekere’ brought a lot of development to Lagos State as governor between October 1,1979 and December 31, 1983 in line with the five cardinal programmes of the Unity Party of Nigeria (UPN), founded by the late sage and former Premier of the Western Region, Chief Obafemi Awolowo.

The Governor also described the former Minister of Works as an epitome of honesty, dedication and selflessness, who used his elevated positions for the betterment of the people he served.

Governor Sanwo-Olu said the late Alhaji Jakande is one of the few Lagosians and Nigerian leaders that demystified politics by bringing governance closer to the people.

He said Jakande left with impeccable records in Lagos State and that is why he remains till date, a reference point for governors in Lagos and other parts of the country.

He said: “On behalf of the Government and people of Lagos State, I want to express my sincere and heartfelt condolences to the family, friends and associates of the late Alhaji Lateef Jakande as well as members of the progressive community.

“No doubt, the death of Alhaji Jakande is a colossal loss to Lagos State and Nigeria. He made lots of positive impact and contribution during his lifetime to the growth of our dear State by introducing housing and educational programmes that targeted the poor, building new neighbourhood primary and secondary schools and providing free education for all.”

“Baba Jakande within his four years in office established the Lagos State University. His government constructed over 30,000 housing units,which were of great value to the masses.

“Having distinguished himself as ‘Action Governor’, Alhaji Jakande was appointed Minister of Works in 1993 where he replicated his developmental programmes, by building thousands of housing units in different parts of Nigeria as Federal Low Cost Housing Estates.

The Governor added that the late Jakande’s selling point is not only in politics but journalism, his chosen profession.

“Alhaji Jakande also made remarkable contributions to the media industry as a respected journalist and media manager. He used the power of the press to influence positive changes in the country’s social and political landscape.”

The Governor reminded Lagosians that the best way to immortalise ‘LKJ’ as late Alhaji Jakande is popularly known, is to ensure that good governance the deceased advocated spreads to every facet of the Nigerian society.

Ecobank Nigeria announces the pricing of its Senior Unsecured $300 million bond
Previous Post
LAGOS, POLICE HALT PLANNED PROTEST, COUNTER RALLIES IN LEKKI OVER THREATS OF VIOLENCE
Next Post
You May Also Like