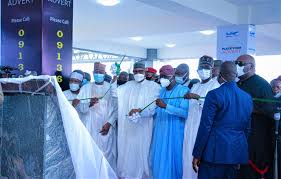 It is also equipped with a 10ELV system, a three-dimensional multi-layer sorting baggage system, including 5 arrival and 6 departure system, 7 boarding bridges, 22 nos guest rooms and spars.

The airport is also equipped with category one navigational equipment, safety facilities and infrastructures.

The President in his address described the terminal as a world-class facility and reaffirmed his administration’s commitment to the development of similar infrastructure across all sectors of the Nigerian economy. 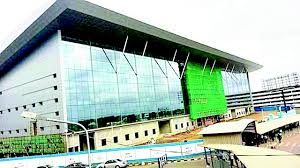 President Muhammadu Buhari has instructed the minister of aviation, Senator Hadi Sirika, to fast-track the planned concession of the four major airports across the country.

The president also instructed the minister of finance, budget and national planning to urgently source funds for immediate construction of the second runway at Abuja airport.

According to Buhari, the concessioning of the four terminals at Lagos, Abuja, Kano and Port Harcourt would propel the development of the new terminals and create more jobs for qualified Nigerians.

The President also commended the Ministry of Aviation and the Federal Airports Authority of Nigeria (FAAN) for the completion of the new terminal, stressing that it would further create more jobs for qualified Nigerians, especially the youth.

Beyond that, the President said that the new terminal would create an additional 3,000 direct and indirect jobs, while the sector’s contributions to the Gross Domestic Product (GDP) would further be enhanced.

The new terminal is expected to generate direct and indirect employment for Nigerians, as well as enhance passenger facilitation and comfort at the Lagos airport.

Speaking at the commissioning, the minister of Aviation Senator Hadi Sirika referred to a recent Aviation sector study for Nigeria by International Air Transportation Association (IATA) in June 2020, showcasing the significant contribution of air transportation to the National economy, through providing 241,000 jobs (direct and indirect) and a contribution of $ 1.7 billion to the National economy.

Referring to the ongoing chaos created in the sector by lack of Jet-A1 leading to unduly flight delays and/or cancellations, the minister of aviation, Senator Hadi Sirika appealed to the President to direct NNPC to import Jet-Al in good quantities and devise means to sustain supply as well as directing CBN to allocate Forex for the major marketers to sustain supply.

Prior to the Aviation roadmap that was developed and approved by Mr President on the 18th October 2016, which includes: National Carrier, Airport Concession, Maintenance, Repair and Overhaul Center ( MRO), Aviation Leasing Company, Agro-Allied Cargo terminals, as well as Aerospace University, Sirika stating how the total passenger figure processed used to be million increased with the implementation of some aspects of the roadmap, the passengers figure grew to about 18 million in 2019, making aviation the fastest growing sector of the national economy pre-COVID-19 pandemic.

Sirika assured Nigerians that the ministry of aviation was “committed to the proper maintenance of all the terminal buildings and would integrate them with other infrastructure to ensure that passengers and other users have pleasant experiences each time they make use of them.

The minister declared that one of the aims of the Ministry was to grow Aviation contributions to the GDP to 5 per cent at $4.7 billion from its present 0.06 per cent in the next few years.

He explained that there would be air-rail connectivity between the domestic and international airports to shorten the traffic time between both terminals.

He noted that the three projects commissioned on Tuesday; Fertiliser, Lekki refinery and the new terminal would change the status of the country.

According to him, they would not only create jobs for the teeming populace but will also open up the country for foreign investments and opportunities.

CCECC had commenced construction of four new terminals at Lagos, Abuja, Kano and Port Harcourt airports in 2013 with the completion period fixed for 20 months

The partnership between Nigeria and China will facilitate seamless operations for passengers who are accessing the international corridor for business and other facilities, the Chinese government noted that Nigeria will continue to leverage the global partnership to enhance its transportation infrastructure as part of its road map to develop the aviation industry.

The terminal is one of four being built in Lagos, Abuja, Port Harcourt and Kano in a bilateral arrangement between Nigeria and China.

Sen Hadi Sirika while speaking with newsmen after the commissioning said he is grateful for being part of the process that produced the infrastructure being commissioned by the President and noted that it will see the growth of the Aviation Industry.

One of the highlights at the event was the signing of a memorandum of understanding between the Federal Airports Authority of Nigeria and the Lagos State Government on the 9km Airport-Shasha-Alimosho link Road to be constructed by the State Government.