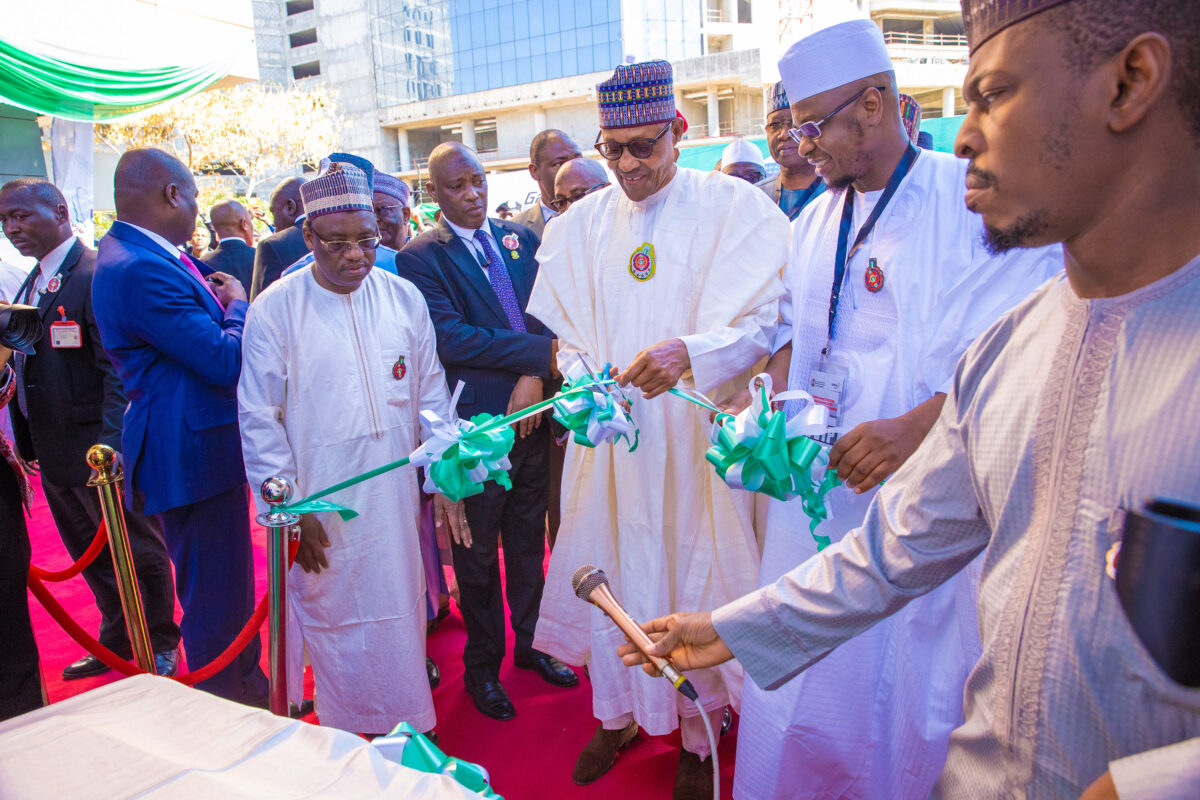 As Nigeria begins to enjoy the benefits of diversification of the countries mainstay from crude oil sales, President Muhammadu Buhari on Tuesday eulogized contributions of the digital economy in driving growth, creating employment and generating revenue for the country, saying auctioning of the 5G spectrum alone generated $547 million, further fueling options for funding development.

President Buhari started this while speaking at the , commissioning of the National Shared Services Centre, a one-stop-shop for Ministries, Departments and Agencies of government to interface with citizens, also housing a Cybersecurity Operations Centre, Network Centre and Call Centre.

The President said the National Shared Services Centre will provide services that are “swift, secure and seamless’’.

In a statement by the Special Adviser to the President on Media and Publicity Femi Adesina, President Buhari noted that the Information, Communication and Technology Sector (ICT) had accelerated diversification of the economy and Q2 Gross Domestic Product Report by the National Bureau of Statistics showed the extent of growth, with the ICT contributing an unprecedented 18.44 percent to the GDP, close to three times the 6.33 percent contribution of the oil sector in the same quarter.

“It is noteworthy that the digital economy sector has excelled in generating revenue for the government. In particular, at the Ministerial Retreat that I chaired from the 18th to 19th of October 2022, our independent analysts adjudged the digital economy sector to have generated 594 percent of its revenue target from the 2019 baseline. This is very commendable. As part of these unprecedented achievements, the sector generated over $547 million dollars from the auctioning of the 5G spectrum alone,’’ he said.

At the event, President Buhari said he was pleased to unveil and commission a number of initiatives that further express the Government’s commitment to develop a sustainable digital economy in Nigeria.

“These initiatives are part of our administration’s efforts to position the digital economy as a key enabler for the diversification of our economy and as a catalyst for the transformation of every sector of our economy.

“You will recall that I unveiled and launched the National Digital Economy Policy and Strategy for a Digital Nigeria on the 28th of November, 2019 and I am

very proud of the giant strides and the unprecedented progress that we have made in in less than one year since the unveiling.

“To ensure that the digital economy sector remains successful and in order to reduce the burden on citizens, I recently approved the suspension of the proposed excise duty in the telecoms sector, as any initiative that will lead to hardship for the citizens would not be pursued,’’ the President said.

President Buhari said the digital economy ensured continuity in governance during the restrictions that came into force as a result of the COVID-19 pandemic.

Engagements for Federal Public Institutions on the 14th of October 2020 and this enabled us to formalize government online meetings. As such, statutory meetings like the Federal Executive Council meetings, Council of State meetings and other meetings can now take place online, effectively and legally.

“Our administration’s commitment to promoting data promotion and privacy is receiving praise across the world and we have increased our digital identity enrolments from 39 million in October 2020 to about 92 million today.

“The massive increase of about 63 million in about two years is a globalsuccess story and has led to several requests for partnership from countries within and outside Africa. I also approved the establishment of the Nigeria Data Protection Bureau on the 4th of February, 2022 to provide an institutional framework for data protection in Nigeria, in line with global best practices,” the President told the gathering of ICT experts and government officials.

He said a number of policies and programmes to enhance the productivity of the digital economy sector had been developed.

“For example, National Policy on NIN-SIM integration has enhanced the integrity of the National Identification Number database. Similarly, the Nigerian Postal Service has been repositioned through the unbundling of its services to increase its efficiency and make it more viable as a revenue generating agency of government. The two subsidiaries are the Property & Development Company and the Transport & Logistics Company.

“I signed the Nigeria Startup Bill into law on the 19th of October 2022. The Nigeria Startup Act is a landmark legislation of this administration to transform the pool of highly talented youth we have in Nigeria into a pool of highly innovative digital entrepreneurs. We aim to make Nigeria a global hub for digital talent. It was an Executive Bill that was initiated by the Honourable Minister of Communications and Digital Economy” he added.

President Buhari commended the giant strides made by the digital economy sector under the Minister of Communications and Digital Economy and other stakeholders, describing it as impressive.

In his remarks, the Minister of Communication and Digital Economy appreciated the President for his support for the digital economy, with turnovers in broadband/Internet penetration, skills acquisition for global competitiveness and infrastructure development, like the fiber optic cable, which was about 15,000kms in 2015, and increased to more than 60,000kms.

Pantami said there had been 2,255 interventions and programmes in the higher institutions of learning, secondary schools, and some private schools, and the quarterly revenue from ICT rose from N51billion (Naira) to N418 billion (Naira), while some prominent institutions like the Massachusetts Institute of Technology, United States, had shown interest in researching the pace of growth in the sector.

The minister listed many policy interventions that had directly impacted on governance, institutions, markets and citizens, assuring that the ICT would enhance the process of diversifying the economy.

At the close of the event, two young Nigerians, Kalim Haruna, who developed a system called “Sharp-Sharp’’ and Bashir Abubakar, founder of “Africa First’’, were honoured by President Buhari for their creativity and ingenuity, and showcasing the nation’s talent in a global ICT conference.