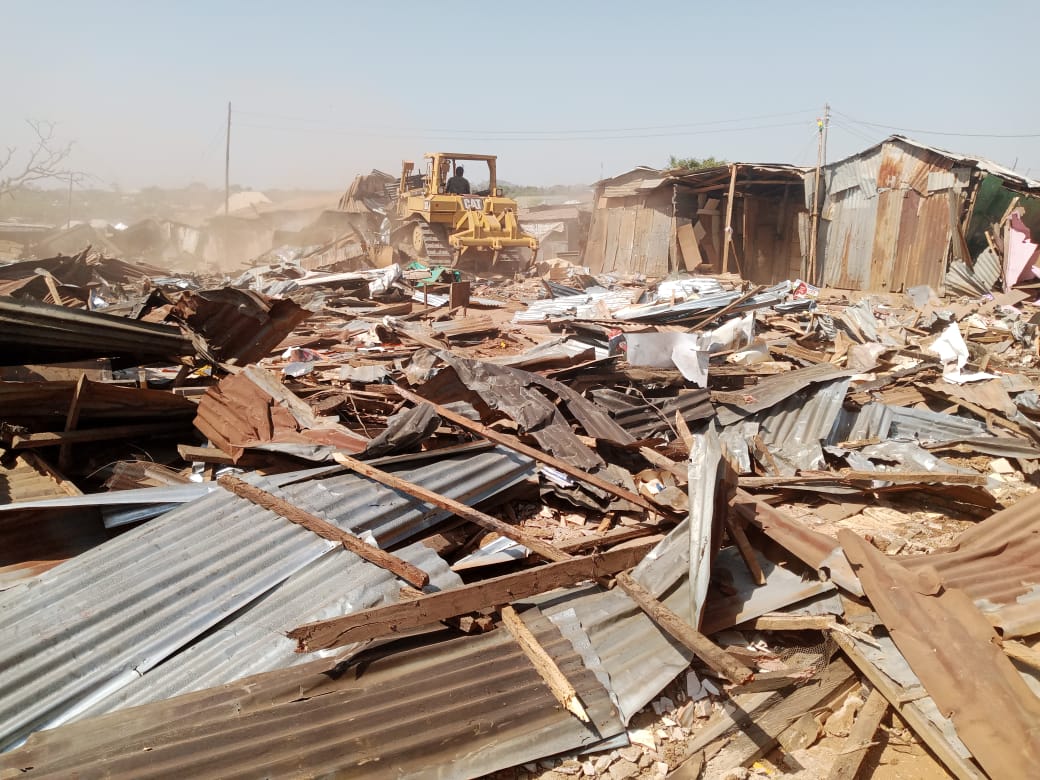 In continuation of its proactive measures to tackle the menace of insecurity and environmental challenges in Abuja during the yuletide season, the FCT Enforcement taskteam raided and removed hundreds of shanties allegedly harbouring criminals in Durumi 1 and 2 area of the nation’s capital city on Tuesday.

The enforcement team was accompanied by joint security personnel drawn from Military and Paramilitary agencies to ensure law and order as bulldozers of the administration stormed the area clearing the affected makeshift structures mainly made of woods and zincs allegedly harbouring criminals and other structures erected without necessary approval from the relevant authorities.

In particular, the team removed structures within a large Garden and Timber shed situated inside cashew tree plantation, attachments to houses and perimeter fence of Junior secondary school and Primary Healthcare Centre, and clusters of shops serving as community market in the area.

Speaking after the exercise, the Senior Special Assistant to the FCT Minister on Monitoring, Inspection and Enforcement, Comrade Ikharo Attah, said it was upon the FCT Minister’s directive, the Team moved into the area to address extreme notoriety disguising in form of shanties along that area.

Attah disclosed that the place is where police reports indicate that there have been very massive secret killings.

In his words, “You could see that for the first time, the indigenes are out leading the machines to areas where people come to rob and attack them, so we are doing the clearing and we are continuing that operation based on what the Minister had asked us to do.

“We have given notice before coming for the actual removal exercise, and about two months ago, the team had even started demolition there, but stopped, only to return now to continue and complete the exercise”, he stressed.

Similarly, Kaka Bello, Head Monitoring and Enforcement, Abuja Environmental Protection Board (AEPB), said although there is a lot of reported criminal activities, but the environmental issue if not abetted will lead to further things which are not good for the environment and inhabitants there.

Not left out, Olumuji Peter, Secretary, FCTA Command and Control Centre, decried that the place became a hibernating point for criminal minded people, which required the removal of all the shanties harbouring them, so that people can sleep with their two eyes closed.

Bawa said the operation is in line with security action that is supposed to be taken, becasue where there are a lot of hoodlums, there is need for clean up, which is a proactive measure by the government, in order to curb the insecurity menace.

According to him: “The rate of killings has reduced to a minimum degree in recent times, as it was almost every week, you will see dead body, and each it happens , we report to the Police for necessary action.