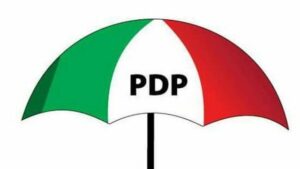 The National Working Committee (NWC) of the Peoples Democratic Party (PDP) after further comprehensive deliberations on issues of concern in the South-west zonal chapter of the PDP has resolved to conduct the zonal congress on Monday, April 12.

Following the rejection of the initial venue of the congress by a former Governor of Ekiti State, Mr. Ayo Fayose, the party agreed to move the zonal congress from Ibadan, Oyo State to Osogbo, the Osun State capital.

Governor Seyi Makinde and Fayose had disagreed on the choice of the venue.

Both leaders are supporting different candidates for the zonal elections.

Fayose and Makinde have been at loggerheads over the leadership of the party in the South-west.

While Makinde is said to be sponsoring Mr. Taofeek Arapaja, a former Oyo State deputy governor, Fayose is said to be backing Mr. Eddy Olafeso, a former governorship aspirant in Ondo State and the immediate past chairman of the party in the zone.

The feud between Makinde and Fayose has prevented the party from holding the zonal congress till now.

But in a statement issued yesterday, the National Publicity Secretary of the PDP, Mr. Kola Ologbondiyan, stated that after a meeting with all stakeholders in the zone, including Makinde and Fayose, it was resolved that the South-west Zonal Congress of the party be scheduled for Monday, April 12, 2021 in Osogbo.

The PDP national leadership promised to work with all stakeholders to achieve a seamless and unifying congress of party in the South-west zone.

The PDP urged all leaders of the party, critical stakeholders and teeming members of the party in the South-west and the nation at large to be accordingly guided.

The PDP commended the spirit of understanding, unanimity and selflessness exhibited by its leaders and critical stakeholders in the South-west in the deliberation of issues related to the zone.