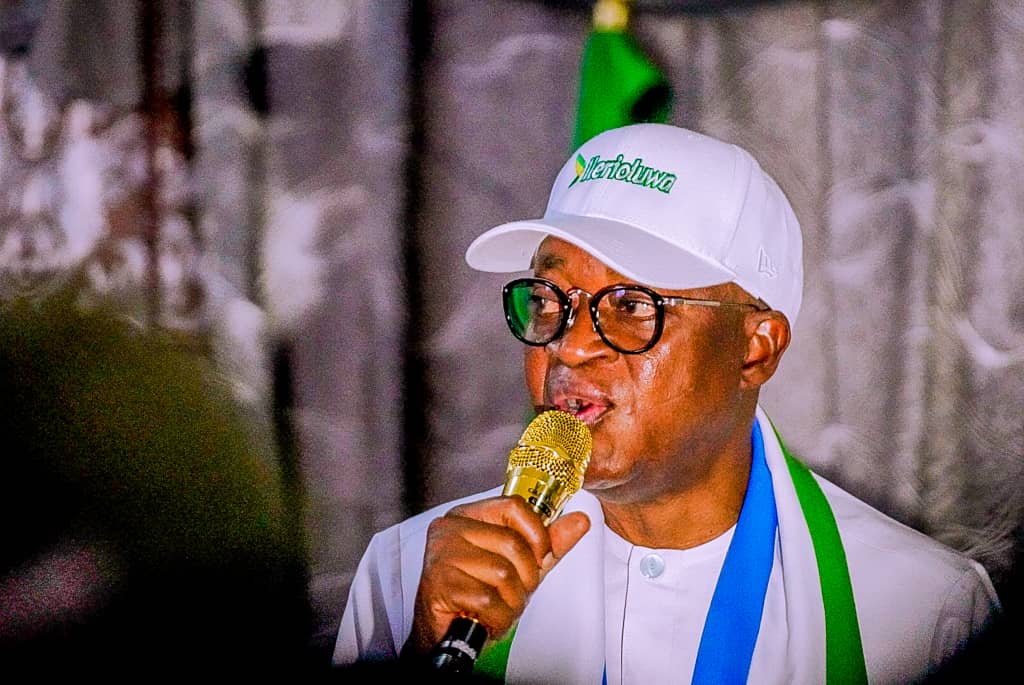 …as Campaign trail moves to Obokun/Oriade

As the Campaign trail of Governor Adegboyega Oyetola moved to Obokun and Oriade Local Government Areas of the State, on Wednesday, monarchs in Obokun/Oriade federal constituency have described Oyetola as the pillar of Osun’s sustainable growth in the last three and half years.

They also described the governor as a competent, performing leader that is deserving of a reelection, just as they commended him for bringing stability to the affairs of the state at a time when the political situation was full of uncertainties.

The monarchs also lauded Oyetola for investing in the improved security architecture of the state, adding that Osun has become the most peaceful state in the country as a result of his attention to security.

They urged their subjects to set sentiment aside and make a wise decision that guarantees greater development and a brighter future.

This is as the Osun All Progressives Congress (APC) welcomed scores of defectors from the opposition Peoples Democratic Party (PDP) in Obokun and Oriade into the Party.

Speaking on behalf of the other monarchs, the President of Ijesha North Traditional Rulers’ Council, Ajalaye of Ipetu-Ijesha, Oba Adeleke Agunbiade, described Oyetola as a competent administrator, a distinguished leader and a humane politician, saying his performance in the last three and half years shows he was built for the job of governance.

Oba Agunbiade also lauded Oyetola for the way he has transformed the fortune of the state, declaring his readiness to campaign for the governor’s re-election.

According to him: “We the monarchs in Osun State have seen your work. In an ideal setting, you shouldn’t be touring the State on campaign again because your works speak for you in the nooks and crannies of the State.

“Most of the monarchs in Osun and in Ijeshaland precisely are professionals. This reality has put us in the position to act as assessors of your performances across different sectors. From our assessment, we can boldly submit that Governor Oyetola is a competent governor, a leader par excellence, and a humane politician with human heart.

“Anyone who knew Osun in the past will testify that this governor has done wonderfully well. Those thinking they can wrestle power from him should think twice, because after Oyetola, it is still Oyetola.

“We are not saying this to make him feel good, we are ready to throw our weight behind him. If we are not breaking any known law, we are ready to lead Oyetola’s reelection campaign. As a matter of fact, I am offering myself as the Director-General of his campaign among the monarchs”, Oba Agunbiade said.

Speaking in their Palaces, the Alademore of Ibokun, Oba Festus Kayode Awogboro; the Elegboro of Ijebu-Jesa, Oba Moses Oluwafemi Agunsoye, and the Owamiran of Esa-Oke, Oba Adeyemi Adediran, lauded Oyetola’s commitment to educational reform and security of the state, among other critical areas of development.

The monarchs also commended Oyetola for prioritising the welfare of both monarchs and their subjects, urging citizens to show favourable disposition to him because he has been tried and found competent.

While addressing the crowd at the various campaign grounds, where some defectors were received, Governor Adegboyega Oyetola assured the people that the modest achievements of his administration in the last three and half years are a foretaste of greater developments that his second term will bring to the state when re-elected.

He said: “The welfare and wellbeing of the good people of Osun, as well as the overall development of the State, hold a centrestage in my heart, and the modest achievements of my administration so far testify to this fact.

“We have paid salaries in the most amazing ways — amazing because resources are limited but we found a way to fulfil our obligations. We are dutifully paying pensions and we are offsetting backlogs. We have given the state infrastructural face-lift as much as affordable. These and many more we have shown commitment to and we will not relent in our commitment.

“We are approaching governance as we should. This is government of the people and for the people, and you can testify that the people have been at the centre of our programmes. Just take it that what you have seen in our first term is a taste of a sweeter sensation in our second term”, Oyetola said.

In their separate remarks, the Chairman of the All Progressives Congress, Prince Gboyega Famodun, and the Director-General of the Campaign Council, Senator Surajudeen Ajibola Basiru, said Osun has stepped up significantly with Oyetola in the saddle.

They urged citizens to support the governor’s re-election, saying Osun does not deserve a downgrade from the high standards already set in the last three and half years.

Speaking on behalf of the defectors, Babatunde Olayemi from Ward 10, Ilare Obokun, said their coming into the Party is not an espionage mission but a genuine passion to align with a government and a party that have showed distinction in governance.