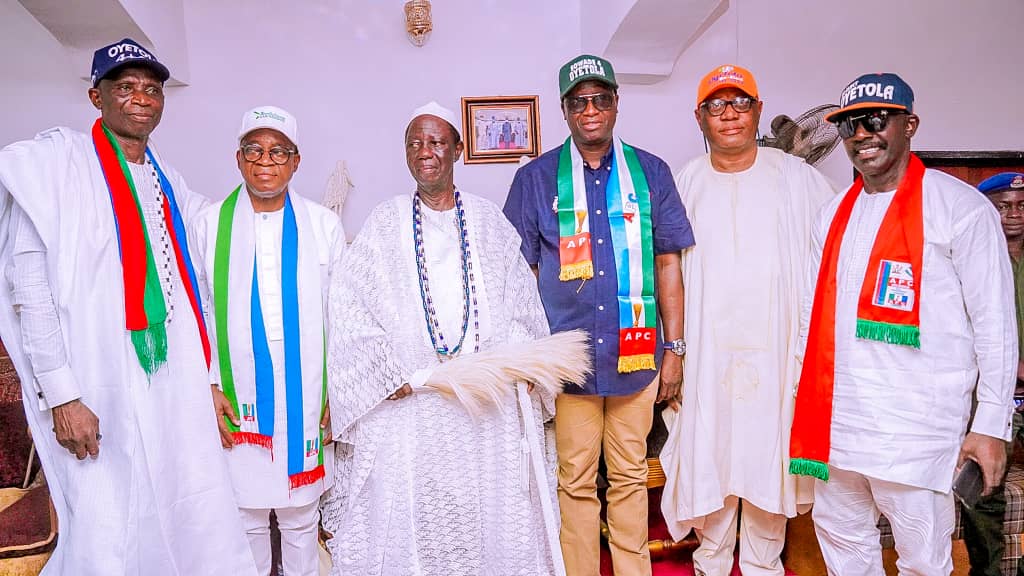 ...over 300 PDP loyalists defect to APC in Modakeke

As the re-election campaigns trail of Governor Adegboyega Oyetola of Osun moved to Modakeke in Ife-East Area Office and Ife-North Local Government Area of the State, the Ogunsua of Modakeke, Oba Joseph Olubiyi Toriola and the Apetumodu of Iperumodu, Oba Olugbenga Joseph Oloyede, have described Governor Adegboyega Oyetola as a game changer whose ingenuity in both private and public sectors had helped to transform the State.

The monarchs said the good works of the Governor have endeared many to him, particularly the traditional rulers who have benefitted tremendously from his purposeful leadership and good governance.

The monarchs said their subjects are resolute to get him re-elected come July 16 governorship election in the State.

This is even as over 300 members of the  Peoples Democratic Party, PDP, pitched tent with the ruling All Progressives Congress, APC, in Modakeke.

Speaking in his palace, Ogunsua of Modakeke, Oba Joseph Olubiyi Toriola, applauded the monumental achievements of Governor Oyetola in the last three and a half years, saying his good record has surpassed their expectations.

Oba Toriola who acknowledged some of the tremendous achievements the State has witnessed, particularly in Modakeke and its environs, promised that his subjects will reciprocate the Governor’s good gesture and re-elect him for a second term.

“I want to assure you that Modakeke is for APC and your government. We will do everything to support you and ensure your return for a second term. We are with your government come rain, come sunshine.

“We are known for progressivism and nothing can change it. We are resolute to get you re-elected and by the grace of God, you will be returned to consolidate on your good works.

“I have respect for you a lot because you are a promise keeper. We have seen in you Omoluabi par excellence and this has manifested in all you do. I can remember the last time we came to you for the reconstruction of some of our roads, you promised what you would do and you swang into action immediately, and today the project has been fixed.

“No doubt, you are a talk-and-do Governor, you walk your talk. Your meek character has endeared many to you, particularly my humble self because each time I look at you and the great things God has allowed you to do, I marvel.

“You have proved to be a loyal and honest leader who leads with the fear of God and love of humanity. We shall continue to support you, we will reciprocate your good gestures with massive votes”, he added.

Affirming their resolution to ensure the re-election of Governor Oyetola,  Apetumodu of Iperumodu, Oba Olugbenga Joseph Oloyede, commended the Governor for giving priority to critical sectors, particularly infrastructure and security.

Oba Oloyede who spoke on behalf of other traditional rulers in Ife-North Local Government Area assured their readiness to ensure the re-election of the Governor.

“By the grace of God you will emerge. You have done well. We have attested to the peaceful atmosphere in the State. Your tenure has been very peaceful and we are hopeful that your second term will be more peaceful. We will support you”, he added.

Basiru who reeled out some of the monumental achievements of the Governor said his return would go a long way to consolidate on his good works.

He said his credentials, pedigree and antecedents will further be brought to bear to transform the State as he remains an inestimable gold in the politics and governance of Osun.

Also speaking, the APC State Chairman, Prince Gboyega Famodun, described the visit of Governor Oyetola to Modakeke and Ife-North Local Government Area as a homecoming in view of the continued support the ruling party has been enjoying from the people of the Federal Constituency over the years.

He urged the residents of the Federal Constituency to come out in large number on the election day, vote massively for Governor Oyetola and monitor their votes until the announcement of the final results.

Speaking on behalf of over 300 defectors, Hon. Adesina Kabir, said the good works
of the Governor was the reason for their defection.

He pledged their unflinching support for the APC, saying they were determined and resolute to vote massively for the party  to ensure the re-election of Governor Oyetola.