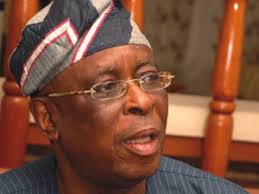 Official report said that the deceased fondly called aunty Iyabo known to have been with the former Governor for over 30 years fell ill and as the boss took up the challenge of getting her best medical treatment at Babcock university teaching hospital ilisan Remo , it was so unfortunate that the deceased could not survive her ailment.

The late scribe is a known household name in Osoba political empire as she is cherished by politicians, visitors and loyalists of her boss because of her humility, respect and dedication.

Late Mrs Iyabo Akindele is also described as one of the soldiers of CHRIST.
Christian wake keep for the deceased will hold on Thursday 23rd of September 2021 at her residence surulere CDA ilese awo abeokuta, ogun state at 4.00 pm . While burial ceremony comes up on Friday 24th September 2021 at 10.00 a.m at the same venue .
Late Mrs Iyabo Akindele is survived by grieving children , immediate family and political family .

It is our prayers that God will give the former Governor, Chief osoba, family and associates left behind the fortitude to bear the irreparable loss. May her soul rest in peace .

ANTI-OPEN GRAZING LAW IS NOT TO PUNISH ANYBODY – OMOTOSO
Previous Post
Bstan Group targets one million houses to tackle deficits.
Next Post
You May Also Like