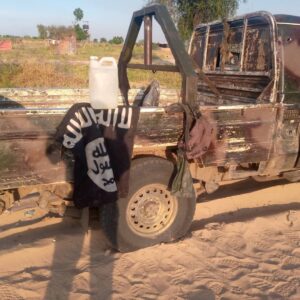 The Nigeria Military Troops of Operation FIRE BALL under Operation LAFIYA DOLE has commenced its robust operations aimed at clearing the remnants of of Boko Haram and Islamic State of West Province.

According to a statement by the Acting Director Defence Media Operations Brigadier General Benard Onyeuko, on the 21 October 2020 troops of Special Response Area Gajiram deployed at Check Point 3 under Sector 3 decisively dealt a heavy blow on BHT/ISWAP criminal elements.

According to the statement, The eagle-eyed troops who were on alert noticed unusual vehicles tailing the convoy of vehicles conveying Internally Displaced Persons from Maiduguri Cosmopolitan City to Baga town in order to infiltrate own position. After the ensuing firefight 3 Boko Haram terrorists were neutralized, One Gun Truck, One Anti Aircraft Gun, 3 AK 47 Rifle, 3 Shells for making Improvised Explosive Device were captured.

In a related development, troops of Army Super Camp Magumeri decimated several Boko Haram terrorists who attacked the location. After the fierce encounter 11Boko Haram terrorists were neutralized. Items captured from the terrorists include: 3 Guntruck, One Dushka gun, and 2 Anti Aircraft Gun destroyed. The gallant troops have continued to carry out mop up operation and dominating the general with aggressive patrols and ambushes.

The statement added further that On 24 October 2020 the troops of Army Super Camp located at Mallam Fatori cleared elements of Boko Haram/ ISWAP criminal elements who attacked their location. After the the fierce battle 2 Boko Haram terrorist were neutralized others escaped with gunshot wounds as traces of blood of dragged casualties by the criminals were seen during exploitation. The troops captured the following: 3 AK 47 Rifles, One Light Machine Gun, 466 Rounds of 7.62x54mm ammunition, 24 Rounds of 7.62x51mm ammunition and One Tecno cell phone.

The statement conveyed the commendations of the Military High Command for the troops of Operation Fire Ball under operation LAFIYA DOLE for the resilience and commitment exhibited during the above encounters. They are equally encouraged not to rest on their oars but build on the successes recorded.The statement concluded.