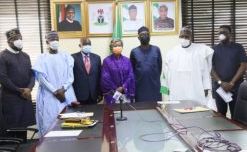 The Minister of Industry, Trade and Investment, Otumba Richard Adebayo during the inauguration in Abuja, charged Agah to make a positive impact.

Adebayo implore the new DG, NOTN to work with critical stakeholders on the African Continental Free Trade Area (AfCFTA) and the second phase of negotiations.

He urged the NOTN to monitor the developments regionally and globally to be abreast with current dynamics in trade negotiations.

His words: “As the Director-General, you have enormous responsibilities. You are expected to provide good and focused leadership to achieve the mandate of the Agency.

“As you are aware, interacting, negotiating and liaising with institutions, public and private stakeholders at all levels, is of paramount importance in your new engagement. Equally significant is harmonious working relationship with your officers and other stakeholders.

The Federal Executive Council (FEC), in May 2017, approved NOTN as the standing negotiating body for Nigeria.

Reports and recommendations from the agency on trade policy will be reviewed by the National Economic Management Team (NEMT).

LASG SET TO PARTNER USAID ON HIV/AIDS, TUBERCULOSIS TREATMENT
Previous Post
OLUSHIP: THE MOMENT KING EMERGES PEOPLE COLLAPSE THEIR DIFFERENCES.
Next Post
You May Also Like