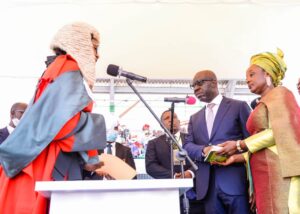 Calls For Unity Templates From Stakeholders

Edo state Governor Godwin Obaseki and his Deputy Phillip Shaibu yesterday reassured his commitment of continue to develop and protect the common interest of all Edo citizens.

Obaseki said he will not only explore the huge potentials in the state but also ensure the state will develop and grow it’s digital economy and operate digital government before 2025.

The governor made this declaration shortly after he was administered oath of office for another four years by Chief Judge of Edo state, Hon Esther Edigin at a colourful ceremony at the Tennis Court section of the Dr Samuel Ogbemudia stadium in Benin City, the Edo state capital.

Others Chief of staff to former President Goodluck Jonathan, Mike Ogiadome, former PDP Governorship aspirant, Ken Imansuagbon and Edobor Iyamu , a senior aide in the office of the Vice President Yemi Osinbajo represented the Vice President. Also the founder of Ben tv, the first ethnic black tv in Europe, Alistair Soyode was in attendance among other prominent sons and daughters of Edo State.

“What you, my dear people of Edo State, achieved with the September 19 governorship election is the restoration of confidence in democracy and its institutions, and we have become a point of reference on how the will of the people can triumph in a democracy that functions properly”

“My re-election represents a new hope and I see myself as a vessel in the redefinition of democracy in Nigeria and I am not unaware that this places enormous responsibility on me”.

“It is pertinent to state that there are many sides to the victory we are relishing today. Aside from the fact that it restores hope in democracy as a form of participatory government, our victory also offers an opportunity for us to bridge the gap between a challenged past and a promising future”.

“The unfortunate crisis we have had to endure as a people over the decades has led to deep divisions, which has resulted in inequality, injustice, underdevelopment, poverty, insecurity and unequal distribution of opportunities”.

“However, this is the time to heal. We are kith and kin with a common destiny. Let us now stop dwelling on the past. It is now time to take our collectives destinies in our own hands as Edo people and commence the arduous task of Making Edo Great Again (MEGA)”.

“Together, as a people propelled by a common zeal in pursuit of progress and advancement, there is nothing that we cannot overcome if we have a consensus on how to move our state forward. What we need is what I call a unity template, with which to overcome our challenges”.

“The unity template has the ability to help us respond to the economic consequences of the pandemic, to deal with our challenges of insecurity and underdevelopment and to put us on a path to Making Edo Great Again (MEGA)”.

“This social contract between government and the people, which you redefined in the last election, calls for trust and reciprocity. We do not claim to have the solutions to all our problems”.

“Before 2025, Edo State will develop and grow its digital economy and operate a digital government. The digital government we are building will plug into the new digital age and would ensure we deliver better and efficient services to all our citizens”

“In realizing our vision as reflected in the MEGA manifesto, we will focus on the following priorities areas;
grow our Social Sector by constantly improving our Education, Healthcare System, provision of social security and safety nets, caring for the vulnerable and the disadvantaged in our state”.

“Build the Economy and drive Industrialization, Trade and Investment, to solidify our state’s status as the choice investment destination in the country”.