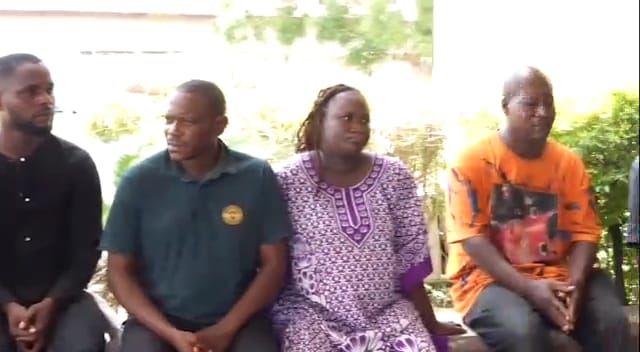 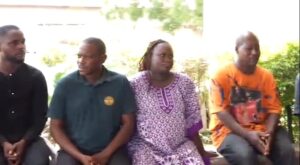 The Niger State Police Command has arrested and paraded a job syndicate run by a couple, and three accomplices for allegedly defrauding over 50 persons of monies worth over N10 million, promising them fake employment at the National Examinations Council’s headquarters in Minna.

The syndicate, which was posing as NECO’s recruiting agents, was arrested at a hotel in Minna, Niger State, after a tip-off by the internal security network set up by NECO’s Registrar, Prof Ibrahim Wushishi.

Among those arrested are a 28-year-old woman, Patience Adamu, and her 48-year-old husband, Matthew Samson, residing in Minna. Others are 38-year-old Godwin Mathew, 35-year-old Emmanuel David and 29-year-old Perter Samuel, all residents of Kaduna, in Kaduna Sate.

According to the Spokesperson of the Niger State Police Command, DSP Wasiu Abiodun, Patience was arrested alongside her husband and three other suspects after a tip-off.

“On 20/05/2022 at about 1230hrs, based on a tip off that suspected syndicate of job scammers were sighted at a hotel in Minna, documenting some applicants for placement into the National Examination Council (NECO) Headquarters, Minna.

Abiudun further explained that during interrogation, Patience confessed that she had contacted about ten unsuspecting members of the public since the year 2020 till date for a job replacement offer at NECO with a payment of N500,000 each, adding that each of the victims made half payment and to pay the balance after issuing them with appointment letters.

“However, she claimed to have arranged a fake documentation for the victims as one of them were pressurising for the next stage of this job placement while she invited three other persons in conspiracy with her husband, Mathew Samson to carry out the fake documentation.

“She said that her intention was to raise money for business and to refund these victims after the business must have boomed. That she had no employment offer or any connection for job placement at NECO.

“In the course of this investigation, we have discovered over 50 victims who have fallen victim of the job racketeering with an amount of over 10 million naira,” he said while advising members of the public to be wary of job scammers of this nature and avoid desperation in the name of seeking for employment.

Meanwhile, at a press conference in Minna, where the alleged syndicate was paraded, Patience confessed to have collected over N10 million from her victims, the proceeds of which she used to purchase four landed property in Kaduna.

“I have collected more than N10 million. I acquired some landed property with some of the money. I have two kids,” she said.

The mother of two denied having any links with NECO, adding that her intention was to refund the monies collected from her victims after starting her business, but for the threat that came on her team.

“I wanted to raise the money for business. I have even started refunding some people. My husband is not aware. I have purchased four lands in Kaduna. The highest was purchased at N1.8 million and the least is N1.5 million,” she said.

One of the victims who spoke anonymously, said he got to know about Patience from a friend; so, they went to her house to make some confirmation.

“So, we went there and asked her some basic questions; she was confirming, she even showed us her family members: her children, her husband also, the cars were there. From there we proceeded to have daily phone call conversations with her.

“So, I asked what was the initial payment? She confirmed that initial payment was going to be N200,000 then afterwards, we will pay another N200,000 when they will se d the documentation, emails and all that.

“Funny enough, the way she was saying it, it happened that I paid the sum of N400,000 and she said after the N400,000 payment and all the documentation, we’ll get the offer letter; and once we collect the offer letter, we’ll pay the remaining balance which was N400,000.

“I paid mine this year, April, the payment was around 18th. So, what actually gave me confidence is that when I paid the first N200,000 it’s like she mistook me for another person and said no, I was supposed to just pay N100,000,” he said

Speaking on the incident, the Spokesperson of NECO, Mr Azeez Sani, urged the public not to seek for NECO job through a third party, adding that if NECO is to employ, it would follow the normal channel which include making it public through advertisment.