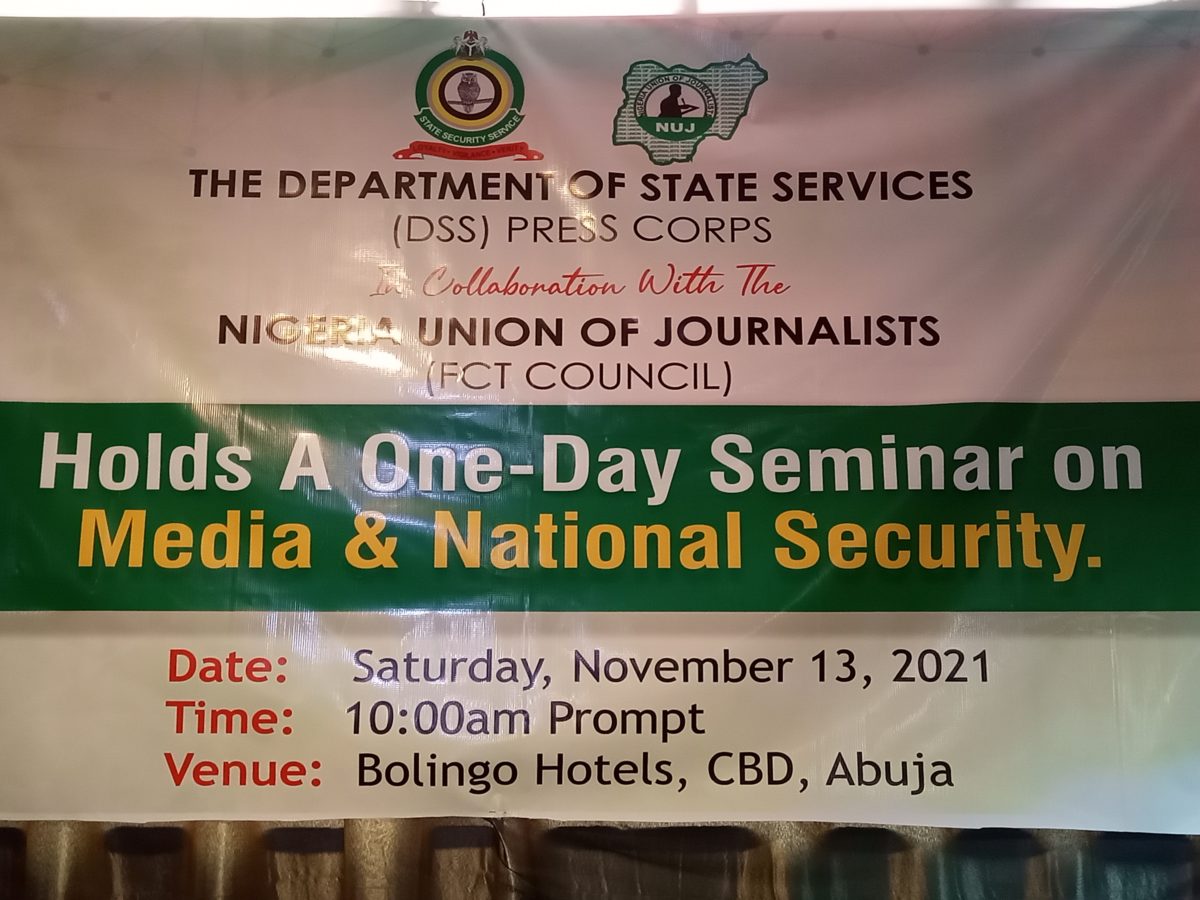 SECURITY: Until Security Agencies See The Media as Partners, Not Much will be achieved – Comrade Ogbeche. 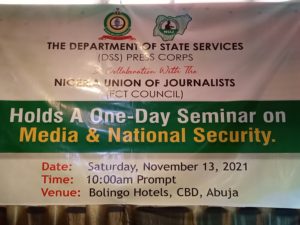 The Nigeria Union of Journalist NUJ FCT Council has called on Security Agencies Across the Country to see Journalist and Media practitioners as partners in progress so as to get the best from the symbiotic relationship that exist between them.

The Chairman, NUJ FCT Council Comrade Emmanuel Ogbeche Stated this when he delivered a Keynote Address at a One Day Seminar on Media and National Security organized by The Department of State Services (DSS) in Collaboration with the Nigeria Union of Journalist (NUJ) FCT Council, for members of the DSS Press Corps.

According to comrade ogbeche,
” It is pertinent to state that while the state exists for the interest of defense, public
safety, public morality, the media also exists to ensure that that government in fulfilling these obligations, abides by the norms, rules and protocols that guarantee these.

” In doing this, the media and security architecture inevitably cross paths; good or bad, harmoniously or discordantly. Why is this so? It is so because the information disseminated by the journalist could be harmful or useful on national security.”

While speaking on why the media and security agencies must uphold professionalism at all time, Comrade Ogbeche said, “The media functions as watchdog capable of blowing the whistle to call attention to serious national issues. This implies a clear recognition of the fact that the media plays an important role on issues of national security. The power of the media to decide what the people should read, see or hear has never been in doubt. What has been in the centre of controversy is the capacity of those in whose hands reside such enormous powers to use that power judiciously and in public interest. Media professionals have the options to use the power of media instruments in their hands either to serve the nation or indulge in self-propelled interest. The media ought to be objective as it carries out its functions.”

” On the other hand, the security agencies who are vested with the authority to ensure public safety, protection of economic interest and political stability cannot achieve these objectives without the media which serves as news conductors. Therefore, creating a healthy relationship with the press is vital.

While Presenting a paper titled “Fake News and National Security” The Public Relations Officer of the Department of State Services Dr. Peter Afunanya said that the spread of fake news cuts across all ages, professions and status
in this era of the social media.

Dr. Afunanya stated clearly that Journalist and Media practitioners should consider the ethnic and religious Diversity of Nigeria in the reportage of stories and events in order not to cause greater harm to the Nigeria state.

In his words, “We believe that in discharging its responsibility, the media must, ,a,lso take into account, the peculiarity of given in terms of ethnic and religious diversities.

“The media must be responsible users of the pen and agenda setting such that the agenda we set must be one that can promote unity, cohesion, on and peaceful co-existence

“When you use your pen to twist facts to suit your emotional and selfish interest and make people of different nationalities fight each other, you are not achieving what the constitution has demanded of you,” he said.

Afunanya urged journalists to shun fake news, adding that it deliberately fabricated and disseminated information to mislead others into believing a falsehood.

Speaking on the incessant faceoffs Security Agents have with men of the Pen Profession, Dr. Afunnanya said it is mostly avoidable if everyone involved learns to work within the boundaries provided by the law.

Other papers presented during the one-day seminar include “The Challenges and prospects of Media /Security Relations in Contemporary Nigeria” Delivered by Mr. Soni Daniel (Editor Northern Operations of the Vanguard Newspaper), “Journalism and National Unity: The role of Nigeria Journalist ” presented by the Publisher Politics Nigeria Mr. Idea to Dumebi.