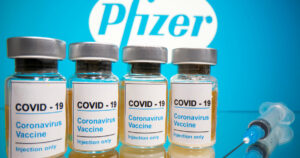 No fewer than 11 state governors are yet to publicly take the COVID-19 vaccine jab after taking delivery of their consignments from the National Primary Health Care Development Agency (NPHCDA), the news team investigation has revealed.

The news team gathered that while some of the governors asked their deputies and health commissioners to launch the vaccination without publicly taking the vaccine, others are yet to kick-start the campaign.

In Cross River State, the Commissioner for Health, Dr. Betta Edu, explained that Ayade was not among the first people that received the AstraZeneca COVID-19 vaccine because frontline health workers, according to the guidelines, were supposed to be the first set of people to take it.

She added that the governor had been away in Abuja.
The state received 53,840 doses of the vaccine on March 10.
In Oyo State, the Commissioner for Health, Dr. Bashir Bello, confirmed that the state received a total of 127,740 doses of the AstraZeneca brand of the vaccine but was still putting in place measures to perfect the vaccination process, especially in view of complaints in some countries, particularly European nations such as Sweden, Denmark, Norway, and France.

He said the state had put in place precautions to protect anyone vaccinated from risk.
He explained: “We, too, in Oyo State have to take some basic precautionary measures. One of the measures was that we ensure first of all, because of the potency of the vaccine, the type we got was the one that can only operate within two degree centigrade to eight-degree centigrade, which we have at our Jericho Cold Store.

“We are trying to ensure that the state modifies its own website because it is a national website for those intending to take the jabs and this has given rise to some misconceptions because some people wrongfully thought Oyo State has got the vaccine and they don’t know what we are doing.

“So, we are trying to take the precautions along with the vaccination procedure.”
The Akwa Ibom State government on Saturday officially commenced the public vaccination but the Secretary to the State Government (SSG), Dr. Emmanuel Ekuwem, kick-started the exercise on behalf of the governor.

The governor, however, told the residents of the state that the vaccine is safe, adding that no report of life-threatening side effects has so far been recorded.
The state government had on March 10, 2021, taken delivery of 69,030 doses of the AstraZeneca COVID-19 vaccines from the federal government.
In Bayelsa State, the vaccination was kicked off by the state Deputy Governor, Senator Lawrence Ewhrudjakpo, as the governor was said to be outside the state.

The news team also gathered that the vaccination of frontline workers and others was scheduled to be launched in Yobe State at the weekend but the exercise did not hold because Buni was in Abuja for another state function.
It gathered that since the vaccination was launched in Rivers State by the Deputy Governor, Dr. Ipallibo Banigo-Harry, Wike has not publicly taken the jab.

It was not certain if he took it privately.
In Kogi State, the governor, Bello, had said that he would not take the vaccine.
However, the state Commissioner for Health, Dr. Saka Audu, had said the state government was ready to receive 100,000 doses of the AstraZeneca vaccine.

Although the Benue State government has also launched the vaccination but Ortom and his deputy, Mr. Benson Abounu, were not present to publicly take the vaccine.
However, Ortom, who was represented by the Commissioner for Health and Human Services, Dr. Joseph Ngbea, urged the citizens to be available to take the second dose in 12 weeks.
In Zamfara State, a source at the Government House told the news team that “Matawalle has been away attending to security issues.”