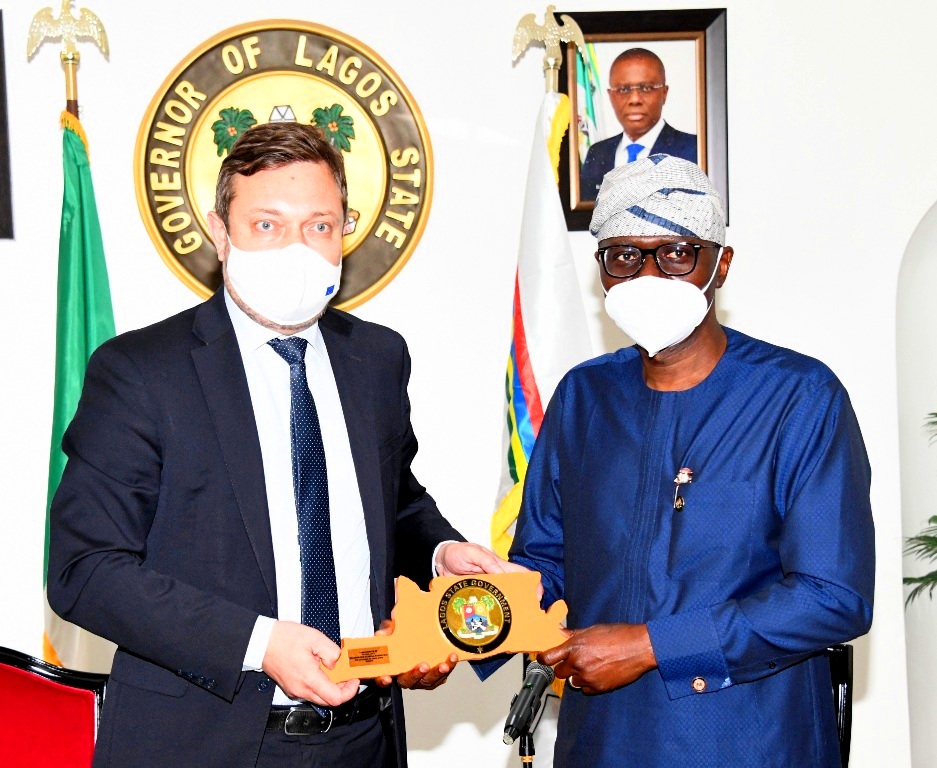 LAGOS WILL CONTINUE TO PARTNER WITH EU ON INVESTMENTS, SAYS SANWO-OLU

Lagos State Governor, Mr. Babajide Sanwo-Olu on Friday said the State Government will continue to partner with the European Union on business opportunities, investments and other developmental issues.

The Governor also reiterated his administration’s commitment to intensify the campaign against Sexual and Gender-Based Violence in the State.

Speaking during a courtesy visit by the Ambassador and Head of the European Union (EU) delegation to Nigeria and Economic Community of West Africa State (ECOWAS), Ketil Karlsen, at the Lagos House, Marina, on Friday, Governor Sanwo-Olu said Lagos State will not take her partnership with the European Union for granted.

Governor Sanwo-Olu also charged Karlsen to ensure that his handover to his successor is seamless so that the good work he did can be advanced.

“We appreciate your support so far. You have shown that when we work together, we can achieve so much. I want to implore you to ensure that your handover to your successor is seamless so that the good work that is ongoing can be advanced.

“We will not take our partnership with the European Union for granted. We know what is expected of us and we will continue to make ourselves available in all engagements,” the governor said.

Speaking earlier, Karlsen commended Governor Sanwo-Olu for his visionary leadership and good work he has been doing in Lagos State since he assumed office two years ago.

He also praised the Governor for the role he played during the COVID-19 pandemic period as well as ensuring that over 260,000 Lagosians were vaccinated against coronavirus.

Karlsen also stressed the need for a continuous and cordial relationship between the European Union and Nigeria, and Lagos in particular.

The Ambassador and Head of the European Union (EU) delegation to Nigeria and ECOWAS, who raised concern over Sexual and Gender-Based Violence, commended Lagos State Government for addressing the issue through the Mirabel Center, a Sexual Assault Referral Centre in the State, which according to him has done very well in addressing the problem.