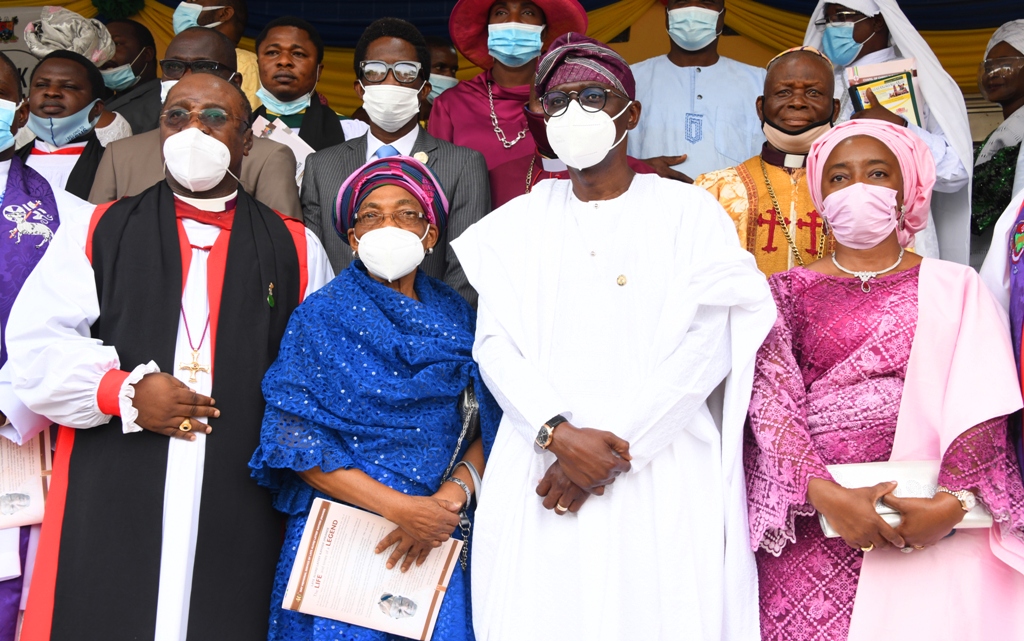 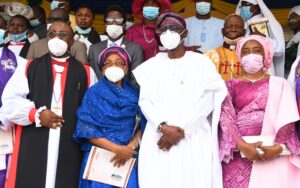 Lagos State Governor, Mr. Babajide Sanwo-Olu on Sunday said the first civilian governor of the State, Alhaji Lateef Jakande, will continue to live in the hearts of Lagosians and Nigerians at large till eternity.

Governor Sanwo-Olu said the legacy left behind by the late Jakande would remain with Lagosians for a long time to come, describing Jakande, a former Minister of Works, as a detribalised Nigerian, who was outstanding in all his achievements.

Sanwo-Olu added that the former governor known as ‘Baba Kekere’ lived a righteous life and will live forever in people’s hearts.

Governor Sanwo-Olu who spoke on Sunday at the 40th day Memorial Service of the late Alhaji Lateef Jakande at the Chapel of Christ The Light, Alausa in Ikeja, said the first civilian governor has laid a foundation, which nobody can erase in Lagos State.

He said: “This service is indeed deserving for our late father, the first civilian governor of Lagos State, Alhaji Lateef Kayode Jakande. We cannot celebrate him enough and we will continue to celebrate him forever for the life that this detribalised Nigerian and outstanding Lagosian lived.

“He built the foundation that all of us are enjoying today. He will continue to live in the hearts of several children and even unborn children because he has indeed laid the foundation for something that nobody can erase.

Reading from Isaiah 41:10, Governor Sanwo-Olu urged family of the deceased to have faith in God Almighty.

He said: “Isaiah 41:10 says ‘Do not fear; for I am with you: be not be dismayed; for I am thy God: I will uphold you with my right hand.’ God will uphold the wife and children of Alhaji Lateef Jakande forever. Lord will also uphold Lagos State and every one of us.”

In his sermon, titled, “The Righteous Shall Live Forever” the Lord Bishop, Diocese of Lagos (Anglican Communion), Rt. Rev. (Dr) Humphrey Olumakaiye, said the definition of righteous man is not about being an angel or a saint but a man that has touched lives while he is alive and used his positions to create opportunities and touched the lives of the people who can never pay him back.

He therefore urged political office holders to see their positions as a great opportunity to serve and benefit the people, noting that righteous people are always concerned about the welfare of God’s creation, which the late Jakande stood for in his lifetime.

Bishop Olumakaiye, who described late Jakande as humble and humane, said the former governor during his tenure never used religion as a tool to divide the state in providing leadership and dividends of democracy for the people of Lagos.

He said Jakande achieved a lot within four years in office and demonstrated service to the masses by providing free education, medical care, low-cost housing and infrastructure, among others for the benefits of not only Lagosians, but entire Nigerians.

Also, Chairman of the Lagos State chapter of the Christians Association of Nigeria (CAN), Rt. Rev. (Dr) Stephen Adegbite, said his generation will never forget Jakande and other Unity Party of Nigeria (UPN) governors in the Second Republic because of how they impacted people’s lives through the people oriented programmes of the party.

During the memorial service also attended by the First Lady, Dr. (Mrs) Ibijoke Sanwo-Olu, Jakande’s widow, Alhaja Abimbola and her children, former Lagos Deputy Governor, Princess Adejoke Orelope-Adefulire, members of the State Executive Council, Body of Permanent Secretaries, Clerics, among others, prayers were offered for the family of late Jakande, who died on February 11, 2021 at the age of 91.