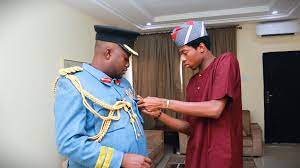 JAGABAN ARMY IS A PEACEFUL, DEMOCRATIC ORGANIZATION OF GRASSROOTS CANVASSERS FOR TINUBU/SHETTIMA AND THE APC

The Office of the APC National Youth Leader wishes to restate the following for the sake of clarification:

1. That the Jagaban’s Army is a sub-directorate of the recently-inaugurated APC National Youth Wing Campaign Council. Its branding as an ‘army’ was informed by the popular regarding of political canvassers as ‘foot soldiers’. Nevertheless, it is a peaceful and democratic organization of young canvassers whose task is to facilitate support and ensure the poll success of the APC in the General Elections, beginning with the victory of Asiwaju Bola Ahmed Tinubu and Senator Kashim Shettima.

2. That the branding of a vote mobilization unit as an ‘army’ is neither an anomaly in democratic politics nor a deviation from democratic norms. Naysayers spreading malicious interpretations — including sensational claims of a ‘violent militia’ — are referred to President Barack Obama’s 2008 branding of his local organizers and campaigners as his ‘peacetime army’. Just as it would be ridiculous to accuse America’s 44th President of attempting to topple the country’s democracy at the time, similar insinuations about the Jagaban’s Army are to be viewed in the same light.

3. That just like Obama’s Army, the Jagaban’s Army is a rebirth of participatory democracy, infused by the energy of millions of Nigerian youths at home and in the diaspora.

4. The ceremonial outfit worn by the leadership of the ‘Army’ at its inauguration bears no semblance to that of the armed forces nor does it purport to be representative of it. It’s no different to those adorned by civil and peaceful church societies, particularly those tasked with evangelization.

5. That it is an ‘army’ to the extent that it is a body of persons organized to advance a cause, in this case the peaceful and democratic cause of preaching the achievements and goodwill of the APC and her candidates to bring about electoral victory.

6. That the operations of the Jagaban’s Army are fully democratic and centered around well-established democratic persuasion methods in every electoral campaign season. This fact is evidenced by the design and deployment of the Canvassers’ Record Sheet, a key tool of the ‘foot soldiers’ meant to aid data collection and test message effectiveness.

7. That the ‘army’ remains focused on its goal and welcomes the enthusiasm and dedication of members and other affiliates of the party who are already hard at work, preaching the Renewed Hope message of Asiwaju Bola Ahmed Tinubu and winning new converts for the party through peaceful and strategic engagements.

We invite all Nigerians to download the APC Youth Wing App on Google Play-store and to join our Army of Progressive Youths on www.joinapc.ng even as prepare to Vote ASIWAJU Bola Tinubu as President.