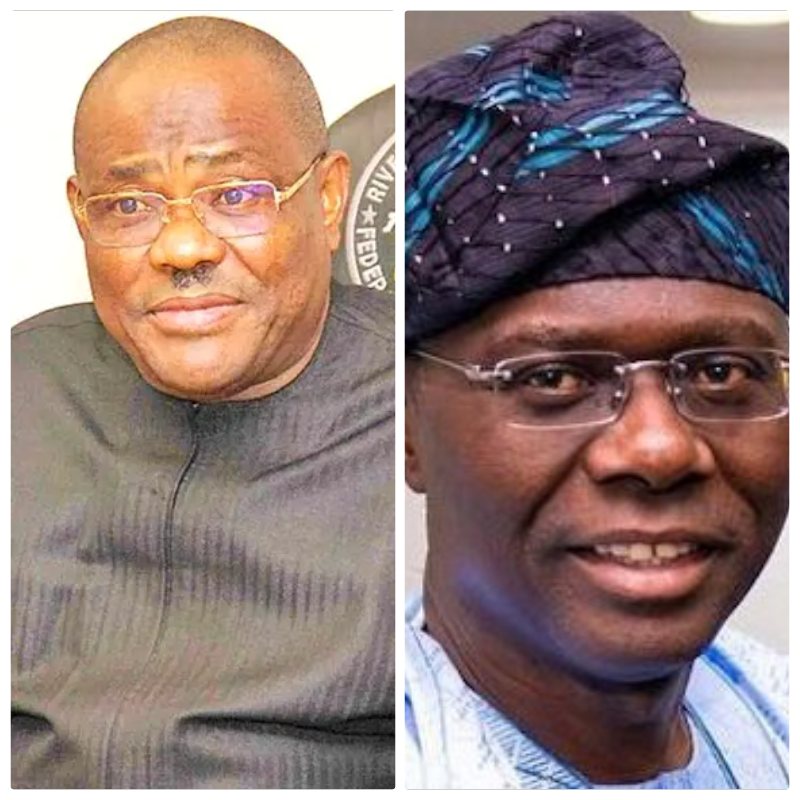 Rivers State Governor Nyesom Wike may have set a new precedent in the nation’s political culture with his open endorsement of an opposition Governor in an electoral contest in which his political party has a candidate.

It was at the 22nd National Women’s Conference organised by the Committee of Wives of Lagos State Officials (COWLSO). The event with theme: “Spring Forth, Stand Out”, was held at Eko Hotels and Suites, Victoria Island, Lagos.

The Rivers helmsman rated Sanwo-Olu high in performance, noting that the Lagos Governor had raised the standard of governance with quality of projects being delivered across Lagos.

Wike said any political party contesting against the All Progressives Congress (APC) in Lagos would be wasting time, as Sanwo-Olu’s performance would outshine anyone campaigning against him.

The Rivers State Governor said he had no regrets for openly endorsing Sanwo-Olu, stressing that his endorsement of his Lagos colleague was borne out of his personal conviction about good governance.

“Look at the kind of project coming from this women’s group. Why would any reasonable person not support the Government that is encouraging this. Let’s also look at the kind of physical infrastructure being delivered in Lagos. This confirms Lagos as a State of excellence. There are some people who will come here; instead of them to continue to make Lagos improve, they will bring Lagos down. For me, I’m satisfied with what Sanwo-Olu has done and it doesn’t matter the party he belongs.”

Sanwo-Olu responded to Wike’s endorsement, describing it as another example of “politics without bitterness”. He said Lagos and Rivers states had learnt from each other in terms of projects and development, adding that both states would continue to cooperate on shared interest.

He said: “There is no better person that is fit as a guest speaker at the conference other than the hardworking Governor Wike of Rivers State. We brought him here to share in his experience and also for him to see what we are doing in Lagos.

“We are encouraging collaboration without bitterness and without talking about our parties or political differences. If you are doing well, it doesn’t matter where you belong. We should encourage peer review across parties. Gov. Wike had invited me to Rivers for projects commissioning in the past. We have challenged ourselves in a positive way; this is good for the growth of our politics and the nation.

Gov. Wike also spoke about the qualities that the next president must bring forward, saying the nation deserved a president that would have the interest of Nigerians at heart.

He urged Nigerians to queue behind someone with vast experience in governance, who has the capacity to turn around the economy and confront insecurity.

Wike said: “We are looking for a president that has the capacity and experience in governance, who can put food on the table for everyone and fight insecurity. That’s the person we are looking for; not some people who are talking about ethnicity.”

The Rivers Governor said he would be going back home with lessons of the Lagos’ National Women’s Conference, stressing that Lagos had set the standards on how to empower women for growth and development. He promised to replicate the idea in his State to further empower women in Rivers State.