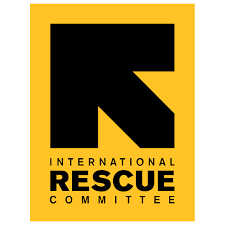 The International Rescue Committee (IRC) is extremely alarmed by the targeting of civilian residences and public infrastructure as the war continues in Ukraine. At least 100 civilians have been killed, more than 160,000 people reportedly have been displaced within Ukraine and over 422,000 have been forced to flee across borders into neighbouring Moldova, Poland and other European states. Europe must not just offer protection to Ukrainian nationals who have visa-free access to the EU, but to people of all citizenship and nationalities who face grave dangers as conflict escalates. Public infrastructure has also been destroyed, meaning thousands of people are without adequate water, electricity and access to markets where roads and bridges have been destroyed. 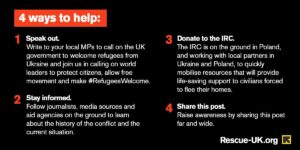 The IRC strongly supports the UN Secretary General’s call on Russia to adhere to International Humanitarian Law, especially the protection of civilians and vulnerable groups such as women and girls.

Lani Fortier, Senior Director of Delivery in Emergencies at the IRC said:
“Last week, a hospital was damaged during the initial stages of invasion; a grave breach of International Humanitarian Law. Active conflict will increasingly put pressure on Ukraine’s health system, already stretched by a 555% surge in COVID-19 cases in the last few weeks and 8 years of war. It is imperative International Humanitarian Law is adhered to in order to protect essential services. As it is when people become displaced, they leave their homes with very little provisions. To then have people cut off from basic services,will only drive further human suffering.

“The IRC is also extremely concerned about the over 422,000 people who have fled borders into Poland, Moldova and other European states, as well as the 160,000 who have been displaced within Ukraine. Ukrainian authorities suggest that if the war continues at the current pace, 5 million people could become refugees. In Poland, which is preparing to receive up to 1 million refugees, the IRC is working to scale up support to the government and civil society and to provide for the basic needs of people fleeing the conflict. The IRC has connected with partners to establish a response that will provide critical support to civilians forced to flee their homes.”