I will be praying for you, Buhari tells new service chiefs 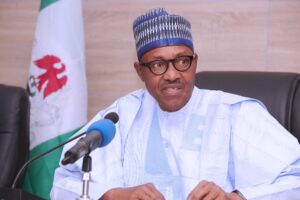 The President, Major General Muhammadu Buhari (retd.), has assured the newly appointed service chiefs of his prayers as they lead  the fight against terrorism, especially in Nigeria’s North-Eastern states of Borno, Yobe and Adamawa.

He also advised the service chiefs to give responsibilities to trusted hands, while charging them to be loyal and patriotic.

The Special Adviser to President on Media and Publicity, Femi Adesina, stated this in a piece on Friday, titled, ‘Inside PMB’s First Meeting With New Service Chiefs’.

Adesina said the President assured the new service chiefs of his prayers and support, adding that “victory comes from the divine powers”.

But human rights lawyer, Femi Falana (SAN), has argued that no level of prayers can win the Boko Haram war, noting that the Federal Government must equip the military to function optimally.

The news men had reported that the President appointed four new service chiefs on Tuesday after much pressure from Nigerians that he bring in fresh hands to pilot the country’s anti-terrorism war.

The new service chiefs met with the President on Wednesday at Aso Villa in Abuja and Nigerians expect them to hit the ground running very fast.

“In terms of equipment and other logistics, we are doing our best, and will do more. Give officers you can trust command, and support them. Respect seniority and intellectualism, but also use people who can deliver, those who show courage and leadership qualities.

“I will be praying for you. I assure you of that.”

The failure of the immediate-past service chiefs to conquer the insurgents had ignited the clamour for their removal and replacement with fresh hands.

For over 10 years, the Boko Haram terror group had killed hundreds of Nigerians in the North-East. The sect had also burnt down and bombed scores of villages as well as churches.

The Nigerian Army and the Presidency had at several times claimed the group had been ‘technically defeated’ and ‘weakened’ but the Abubakar Shekau’s bloodthirsty faction continues to strike with daring effrontery and crude savagery.

A number of video clips had also surfaced online showing soldiers lamenting the lack of equipment to confront the marauding insurgents. Some of the soldiers were later charged and punished for various offences by military authorities.

But Falana said the punishments were unjust, adding the that the government must go after those who siphoned the funds meant to purchase arms to fight the anti-terrorism war.

He, therefore, charged the new military chiefs to prioritise the equipping of the Nigerian Forces to defeat the war on terror.

The rights advocate, who spoke recently on a BBC programme monitored by The news men, said, “They (new service chiefs) should ask for the necessary equipment to fight the war on terror.

“Right now, the equipment is not there and I am speaking from personal knowledge and experience; I have defended more military officers and soldiers than any lawyer in Nigeria when it comes to taking them to court martials particularly for those who are alleged to have committed war crimes or those who demanded ammunition to fight the war on terror but who were otherwise charged with mutiny.

“Some of them are in jail now and we are working to get all of them out now because they ought not to have been sent to jail. Those who stole the money meant for fighting the war on terror, the government has to recover the money and use it to buy weapons to prosecute the war on terror.

“You must also take care of their loved ones if they die in the course of fighting the war on terror. The new officers will have to address these if they want to succeed.”