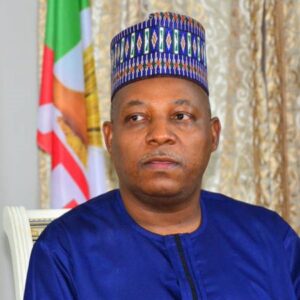 Former Governor of Borno State, Kashim Shettima, has said the choice of the President, Major General Muhammadu Buhari (retd.), of the new service chiefs was well-informed.

Shettima, who was at the centre of call for the removal of the former service chiefs, said his agitation was never personal.

Briefing journalists in Maiduguri, Shettima, who is now a Senator representing Borno Central, said Buhari made well-informed choices in his appointments of new service chiefs.

He said, “The President made a well-informed decision. I have interacted with some of them and I can attest to their character and professionalism. General LEO Irabor (the chief of defence staff), is one of the finest officers the Nigerian Army has produced in recent times. Rear Admiral Zubairu Gambo who is the Chief of Naval Staff had served here in Borno and so has General Ibrahim Attahiru (the new chief of army staff) who was also in Borno for a brief period. We all know that depending on the situation General Attahiru might have met on ground as theatre commander back then, there is always a difference between when someone is working under another and when he is in charge.

“Today, he is chief of army staff who heads the Nigerian Army. This appointment provides an opportunity that will insha’Allah prove General Attahiru’s leadership credentials and I believe that insha’Allah he will succeed. The success of all the service chiefs is in our best interest as leaders and as people of Borno.

He is early called for the replacement of the former service chiefs, Shettima said he had nothing personal but the interest of Borno and the nation at heart when he made the call.

“It is about our survival as a people and no one can take away the fact that these service chiefs made contributions to Borno’s fight against Boko Haram and Nigeria’s fight with bandits and other criminals. We really wish them the very best.”