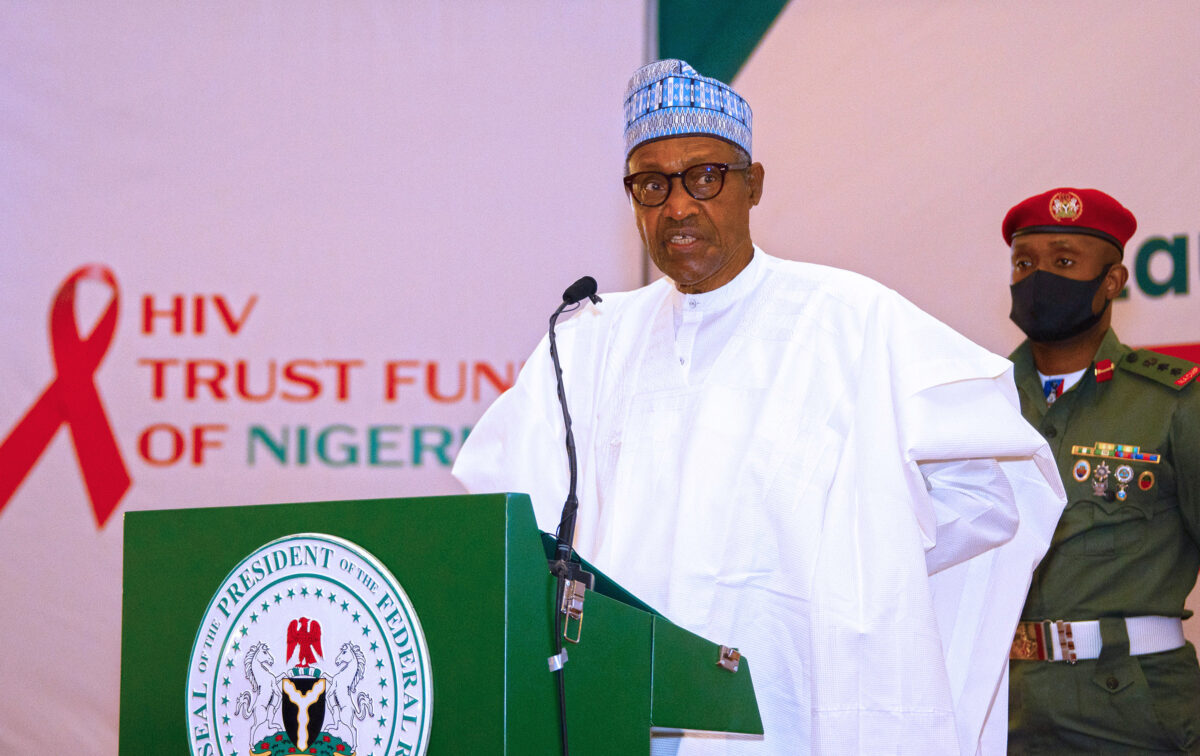 The President who was Speaking at the launch of the HIV Trust Fund of Nigeria (HTFN), pledged that his administration would continue to prioritize health interventions to address killer diseases and public health emergencies.

In his words, ”At the last United Nations General Assembly High Level Meeting on HIV/AIDS, I made a call for a renewed global action to address the HIV/AIDS epidemic in Africa.

”Ending AIDS as a public health threat in Nigeria will require increased domestic funding. We have continued to make good our commitment of placing more people living with HIV on treatment annually using national resources.

”However, strong domestic resource mobilization with an enduring partnership and shared responsibility is required to sustain the response to HIV and other emerging public health emergencies,” he said.

According to the statement by the Special Adviser on Media and Publicity Femi Adesina, which carried President Buhari position on public health challenges in the country, the President noted that Nigeria’s purposeful partnership with the private sector in the response to COVID 19 pandemic had provided a readily available financing solution to leverage on to sustain the HIV response.

He commended the National Agency for the Control of AIDS (NACA) and the Nigeria Business Coalition Against AIDS for their efforts in establishing the HIV Trust Fund of Nigeria to secure a generation of babies free of HIV.

”Going forward, I hope The HIV Trust Fund of Nigeria will galvanize more of the private sector and other partners to surpass the target of Sixty-Two Billion Naira in the next five years,” he added.

In his remarks, the Secretary to the Government of the Federation, Boss Mustapha announced that since 2005 about 6.2 billion dollars has been spent on HIV response in Nigeria.

”About 80 per cent of the funds were contributed by external donors, mainly the US President’s Emergency Plan for AIDS Relief (PEPFAR) and the Global Fund to fight AIDS, Tuberculosis and Malaria. The Private Sector contributed 0.1 per cent to 2 per cent of total funds with the rest of funds provided by the Nigerian government.”

He said the launch of the HTFN will guarantee funding from the private sector-led resources for HIV interventions especially for the elimination of the Mother-to-Child transmission of the virus.

”Since 2005, about 6.2 billion dollars has been spent on HIV response in Nigeria about 80 per cent of the funds were contributed by external donors mainly the US President’s Emergency Plan for AIDS Relief (PEPFAR) and the Global Fund to fight AIDS, Tuberculosis and Malaria. The Private Sector contributed 0.1 per cent to 2 per cent of total funds with the rest of funds provided by the Nigerian government.”

Chief Launcher and Chairman and CEO of Dangote Group, Alhaji Aliko Dangote said the mission of the private sector led fund proposed by NACA alongside the Nigeria Business Coalition Against AIDS (NiBUCAA) is to ensure mobilisation of resources towards eradication of AIDS in Nigeria, starting with the Prevention of Mother-to-Child transmission of the virus.

”I am reminded that we have 2 million of our compatriots living with HIV/AIDS and it is our collective responsibility to bring this number down to zero,” he said.

”We would like the private sector to work in partnership with the Federal Government on a 50-50 basis which we believe will help us eliminate Mother-to-Child transmission of HIV/AIDS in Nigeria,” he said.

Also speaking, the Director-General of NACA. Dr Gambo Aliyu thanked the President for his commitment and support for the HIV response in the country, noting that as a direct result of his intervention, NACA now procures HIV commodities at manufacturers’ rate, as a result of which more Nigerians living with HIV have been placed on treatment from domestic resources.

He said within the last 3 years, the agency has identified and placed on treatment an additional 900,000 persons living with HIV, bringing the total number of Nigerians on HIV treatment to 1.7 million.

”This unprecedented feat puts Nigeria on a fast-track lane to control HIV spread by 2023.

”However, despite these achievements, our national coverage of prevention of mother to child transmission is less than 50%, leading to about 22,000 cases of mother-to-child transmission of HIV every year in the country,” he said.

Justifying the need for the Fund, the Director-General said providing life-long treatment to all PLHIV even after successfully stopping new HIV infections would require a domestically sustainable financing mechanism.