“I have a dream to make this world a better place to live for our unborn generations and that dream will come true through silent revolution-the revolution of positive actions and positive deliberations. Be a part of that revolution.” Amit Ray

This quote by Amit Ray, an Indian author and spiritual master, succinctly captures the mindset and best describes the style of the Ogun State Governor, Prince Dapo Abiodun, who, since taking over the mantle of leadership has been working relentlessly, but in a silent and systematic manner to turn around the fortune of the Gateway State in all facets with the “Ise ya” mantra under his administration’s “building our future together” roadmap.

Unlike his peers in some other States who usually shout to the roof top over every accomplishment, even if minute, and end up breaking the vault in the course of doing this, Abiodun appears to be a strong believer of the “Let my work speak for me” school of thought as he goes about calmly and quietly delivering the goods. This is regardless of the dwindling resources available to the government, partly occasioned by the debilitating effects of COVID 19, a pandemic ravaging the entire globe.

At a point, this attendant silence about his giant strides across the State was almost misconstrued, such that some residents began to show anxiety of what government has in the kitty.

But like a golden fish that has no hiding place, the works of Governor Abiodun in all facets across the State are becoming apparent! More and more people are now beginning to acknowledge his silent but aggressive efforts in virtually all facets of social well being, all in the bid to make living more abundant for residents of the State. However, this write-up will focus only on road infrastructure.

As at the last count, the administration has constructed, maintained, and rehabilitated about one hundred roads spread across the length and breadth of the State. Just a few of such roads would be highlighted here.

These include the 14 km Ijebu-Ode-Epe road which had been in deplorable state for over two decades, now being reconstructed into six lanes with lay bys, thus creating the potential for strengthening economic synergy with Lagos, the country’s nerve centre. The 42 km Abeokuta-Sagamu dual carriage road which links the State capital to Lagos and the Eastern part of the country is also being given fresh breath with ashphalt and standard road median. Additionally, the 4km Osi-Ota-Ikola-Navy- Raypower road has been dualised also to link up with the part which the Lagos State government had earlier completed. 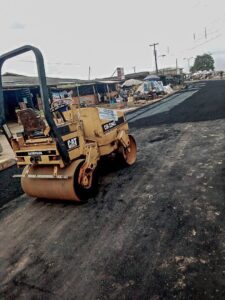 Worthy of note, is the fact that some of these roads are being provided with necessary architecture such as street  lights, discharge drains, culverts, warning signs and walkways on both sides. All of these add to aesthetics and also go a long way in dealing with the problem of flooding.

It is also instructive to observe that as a demonstration of his firm belief that government should be a continuum, Governor Abiodun mobilized contractors handling some roads left uncompleted by the last administration back to site. After all, such roads when completed would become useful and for the general well being of residents irrespective of their political leaning.

This gesture is a rarity among Nigerian politicians, who are known to abandon projects initiated by their predecessors in office; thereby jettisoning continuity and saving taxpayers money.

What’s more? The all-important 32 km long Sango-Ojodu-Abiodun road linking Alagbole and other communities which cuts across Ado Odo/Ota and Ifo Local Government Areas was not left out. The importance of this road is underscored by the fact that residents of the area, most of whom work in neighbouring Lagos State because of its proximity, are expected to pay their taxes into the coffers of Ogun State in compliance with the residency rule. 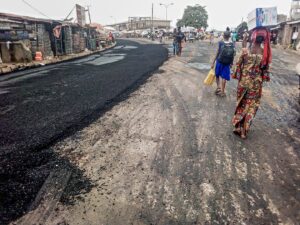 Initially, some palliative works were carried out on the road which was gradually becoming impassable. With this, commuters in these border communities are now heaving a sigh of relief, as the road which was basically impassable once again becomes relatively motorable. And to make its completion easier in the shortest possible time, the Prince Dapo Abiodun led- administration had gone a step ahead to redesign it.

The socio-economic benefits of this statewide intervention on roads are not far- fetched, as some of them already completed are now serving as bypass. This has resulted in the reduction of man-hour loss hitherto caused by traffic hold up. Transportation of goods particularly, farm produce from the hinterland to the urban centres as well as that of finished products from one point to another across and even beyond the State is now becoming a lot easier.

Apart from these direct benefits, the construction of the roads, most of which are being done through direct labour, also created employment opportunities for local artisans such as bricklayers, carpenters and iron benders engaged who hitherto were jobless or underemployed. This has led to the enhancement of their economic abilities. The roads would also be an attraction for more industrialists to troop in en masse into the State for more business activities.

At the end of the day, such industrialists would pay taxes into the coffers of the State government, thereby increasing its internally generated revenue and enhancing the ability to construct more roads and continue other people-friendly interventions like affordable housing schemes, qualitative education programmes among others that are also already receiving government attention. No doubt, this is a win-win situation for the government and residents of the State alike.

With sixty two of these roads already completed and thirty two others at different stages of completion, what is required of residents is to do their bit by continually paying their taxes and ensuring that the roads are not vandalized under whatever guise, but properly maintained to make way for longevity.

It is only when this is done that the citizens of the State would have joined hands with Governor Abiodun to be part of a silent revolution, the revolution of positive actions and positive deliberations to create a better place to live for our unborn generations as espoused by Amit Ray.