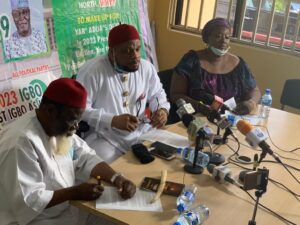 Following the agitation for the southern president in 2023, the Igbo leaders have told north and the southwest geo-political zones in the country to allow the southeast to produce the next president of Nigeria.

BEN TV  reports that the Igbo leaders warned the politicians from the north and the southwest to stop arrogating to themselves the sole power to decide the fate of Nigeria saying the Igbo have come of age and deserve a shot at the presidency in 2023.

They made the demand at a news conference in Abuja under the auspices of Global Movement for Igbo President (GLOMIP 2023) and the Ohanaeze Ndigbo UK and Northern Ireland. 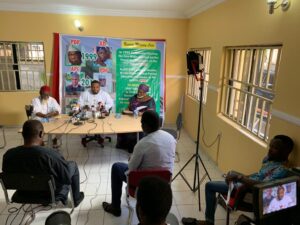 A former governor of Anambra state, Chief Chukwuemeka Ezeife, while speaking at the event, called for a restructuring of the federation, saying that the Igbo are already projecting some persons for the 2023 presidential contest.

He also dismissed concerns that the Igbo are republican in nature and may not be able to unite for a common cause, especially with regards to the 2023 presidency.

“If you mention some names, they are not Igbo enough and are not acceptable at all to us because we know they will sell out. So, we will bring somebody who will show love to all, show love to Hausa, Yoruba and to his Igbo brothers and to all Nigerians. It is too early to name names, but we are already projecting some people.

He recalled that there was a time when the World Bank declared that some parts of Nigeria were growing faster than the rest of the world.

“Then what happened? There was a coup in 1966 and from then we started to take giant steps backward. We must know where our problems started.

“We need to go back to what used to work and instead of regions, we may use the current six geo-political zones. They can be adjusted but it must be based on fairness. Some people in the North believe that restructuring is about resource control or that when we restructure, they will lose oil money.

Mazi Godson Azu who read the press statement on behalf of Nnanna Elias Igwe, the president of Ohanaeze Ndigbo UK and Northern Ireland, said the Igbo would no longer play a second fiddle.

He said one of the veritable ways to stop secessionist agitations is to cede the presidency to the Igbo in 2023.

According to him and I quote

“I want to say very clearly and with all boldness of heart and confidence, 2023 we are not going to be a joker to anyone. We are ready to go after any Igbo man who disrupts the waters because there are Igbo men who take joy in disrupting waters and steering it so that nobody will drink from it. We have told them, we know them.