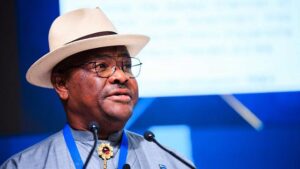 Rivers State Governor, Nyesom Wike, says the Federal Government is insincere in its fight against insecurity in the country.

Wike, who spoke on Channels Television’s Sunday Politics programme monitored by the news team, said the government has politicised its fight against insecurity.

He said, “First, you have to ask yourself, is the Federal Government sincere? Are they serious about making sure that there is security in all the states? If you ask me I would say No.

“We must understand when people play about politics. The Federal Government is not sincere about security. What I am saying today is not new but again, one has to speak up to say this is not the way the country must move.”

He said, “Our concern is to make sure they provide security for this country. That is what they would say. Now, how have they made sure they made provision for the security of lives and property in each state for us to have confidence and trust in the government?

“The assembly approved it. We went ahead to appoint people who are retired security officers. We wrote to the army, to the SSS, to the police to make sure they profiled those who have applied to help in terms of security and they all certified them.

“It did not only end there, we wrote to NYSC to use its camp for training so that it does not look like we were training militants. They agreed and the police and the SSS were involved. But the former Chief of Army Staff, General (Tukur) Buratai sent his men from the state division to make sure that it never took place and to arrest and detain all of them.

“The army has so much involved in politics. So, I cannot believe that the Federal Government is serious about community policing. That is politics and I don’t want anybody to mislead me, to deceive me.”

On the way forward, Wike said, “The truth of the matter is that if we want this country to move forward, the state must take control of the security apparatus of their states. I know the local governments and the communities, so I should be able to say this is what we should do in policing this area.”