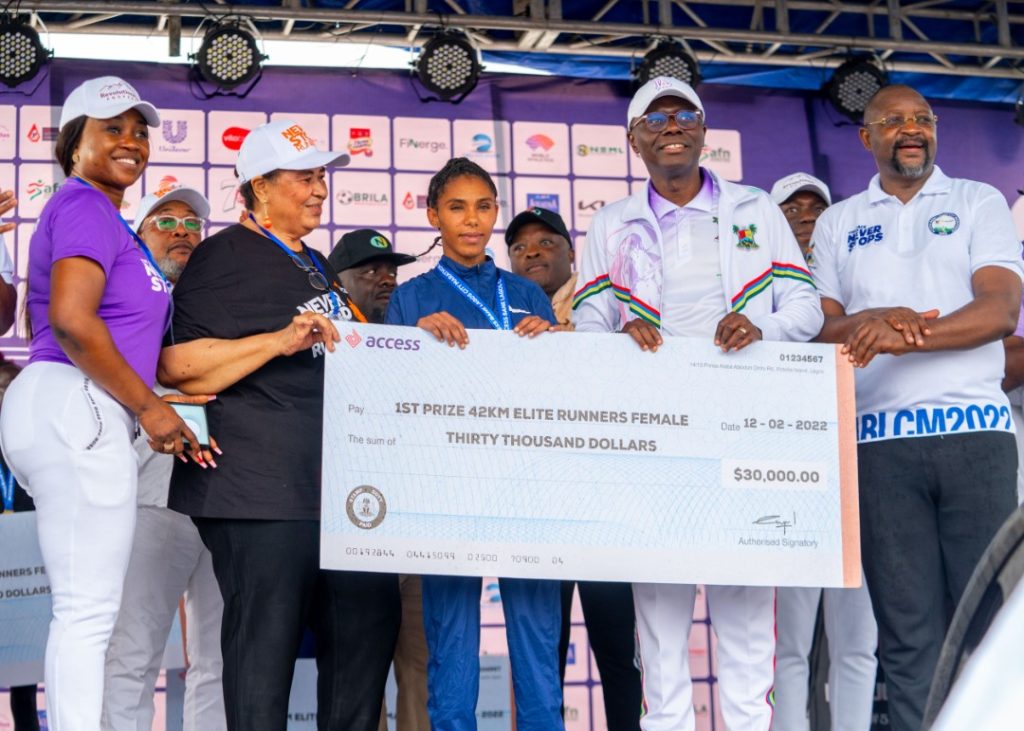 Ethiopia’s runner, Ulfata Deresa, finished the 42-kilometre-long race 11 minutes after the Governor’s arrival and became the winner of the marathon’s 7th edition in the male category. He set a new finish time record of 2:11:58 and clinched $30,000 cash prize.

Sanwo-Olu took off from the State House in Marina, jogging through highways to Eko Atlantic City; he covered 8km distance in 40 minutes.

The marathon is an elite-labeled athletic fiesta held in second weekend in February of every year in Lagos and draws participation from local and international teams in the athletic ecosystem. It kicked off at 6am.

Sanwo-Olu said the event had consistently placed Lagos on the global radar, noting that the sporting fiesta had become a yearly ritual for athletes.

The Governor said the marathon embodied the spirit of Lagos, which teaches endurance, perseverance and resilience while toiling through physical strength.

He said: “One of the objectives of this event is to put Lagos on a global platform in the area of sport. Every year, new records are broken and the marathon gets bigger and better. As a Government, we are fully committed to sustaining this noble initiative and leading from the front to ensure that all participants, especially, our youths, get the best from this event.

“I acknowledge the great work which Access Bank and all other sponsors have put in to make this edition a success. The goal of the marathon is to use sport as a tool to promote physical fitness, togetherness, resilience and every virtue that can make human beings progress and live fulfilling life. This is the strongest rallying point for our youths and next edition would be better than what we have had this year.”

Sanwo-Olu pledged his Government would be relentless in raising the status of the marathon to a platinum-labeled event to attract more participants beyond Africa.

This, the Governor said, would open up the State’s economy for more foreign investment and boost tourism revenue for operators in the sector.

Sanwo-Olu said the decision of Kenyan Airways, a global aviation brand, to be part of the sponsors of the event this year indicated that the marathon would bring more tourism opportunities for Lagos if attained platinum level.

“We target the next two years to get this marathon to the platinum level, which means the event would be fully globalised. When this is achieved, every second weekend in February becomes calendarised for this marathon and Lagos would become a place to be and a destination for all sport enthusiasts,” the Governor said.

Presenting the prizes to the winners, Sanwo-Olu encouraged participants from Nigeria to brace themselves for first prizes in the next year’s edition.

Alemenesh Herehaguta and Naomi Maiyo, both Kenyans, won $20,000 and $15,000 as first and second runners-up in the female category.