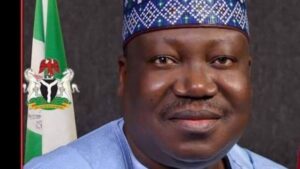 President of the Senate, Ahmad Lawan, has said that the 2023 General Elections will see a drastic reduction in electoral violence after the passage of the amended version of the Electoral Act in June this year by the National Assembly.

Lawan gave the assurance on Tuesday while fielding questions after delivering a lecture at the National Defence College Course 29 Programme in Abuja.

According to the Senate President, the Electoral Act under amendment by the Ninth National Assembly will provide for an Electoral Offences Commission, charged particularly with the responsibility of prosecuting electoral offenders.

He added that the piece of legislation when passed and signed into law would among other things, empower the Independent National Electoral Commission to conduct transparent elections in Nigeria.

He said, “let me give some commendation to the National Assembly for continuously working on the Electoral Act to provide for a better Electoral environment in Nigeria.

“All the improvement we have added was as a result of legislations passed by the National Assembly, and of course, supported by the Executive.

“This is going to be a continuous effort because electoral violence is largely a product of either genuine or misinformation of iniquity or some kind of conspiracy against certain persons during elections.

“But I also believe – and that is the position of the National Assembly generally – that we should have the Electoral Offences Commission, so that people who are involved in electoral violence will be prosecuted.

“I believe that it will go a long way in reducing and minimizing of all these tendencies of people taking the laws into their hands.

“But in addition, we are currently working on the Electoral Act, we want to amend it and we intend to achieve the amendment before June or thereabout.

“Our intention in the National Assembly with this is to further sanitize the electoral environment, and empower the election management body – INEC – to conduct seamless, transparent and very open sort of election where a winner is very happy that he is a winner and a looser will be glad that he lost in a very fair contest.

“So, we are working on this and we hope that the 2023 General Elections will see less of electoral violence because the law itself would have been further improved.”

Speaking earlier during the lecture, the Senate President attributed the challenges faced by the Federal Government to various types of discoloration from conspiracies woven around political, ethnic and religious sentiments.

He, therefore, admonished Nigerian leaders to deploy strategic leadership tact needed for the realization of developmental initiatives that accommodates the national interest.

“For us particularly in this country, strategic political leadership is an imperative for development. You can’t but deploy it, and leaders must be strategic. And, it is required even more in countries like ours where the challenges of development are most.

“Unfortunately, almost every issue you bring in Nigeria would rather have or would be given either political, ethnic, geo-political or religious coloration.

“So, it makes governance tough. It gives leadership massive challenges because such colorations complicate the issues.

“Issues that could easily be relative and understood with little effort become so enmeshed in controversies that it may take you time to recover, and probably you may not even recover at all.

“This is an opportunity for me to appeal to all of us in political leadership that our responsibility to the people of Nigeria must remain the one and only critical factor for taking decisions.

“The national interest must override any other interest because it is the interest of the majority of the people of the country. If we do that, chances are that we will always get it right.

“I think it will be unpardonable for anyone to think that you can create controversies around government’s development programmes or projects. Let there be progressive and positive criticisms. Let’s allow government a chance,” Lawan said.

Identifying diversity as a fallout of a heterogenous society such as Nigeria, the Senate President further called on leaders across the country to foster unity in their quest to achieve development and progress.

“Nigeria is heterogenous, and there’s diversity. And, as leaders we must ensure that we weave the diversity into our strength, that we are able to create and sustain unity to engender peace and progress,” he stressed.

Assessing the collaboration between the Executive and Legislature, Lawan said, “as leaders and members of the National Assembly, we have to achieve unity of purpose. We have to attain bipartisanship.

“And, having achieved a united and very focused National Assembly, we also need to work in harmony with other arms of government, and particularly with the Executive arm that we work with on almost daily basis.

“But the essence this is that we are stronger, more productive, more effective and efficient together.

“As members of the National Assembly and a government, if distinguished members of the National Assembly work in unison to deliver their legislative interventions for the executive to work with; and between the executive and the legislature, there is mutual respect and consultation, as well as cooperation and partnership, the citizens get the best deal because performance and arrive deliver will be enhanced and sustained. This is the essence of any government.”

The Senate President added, “Let me also emphasize that because our constitution provides for three arms of government, there are checks and balances that we have to make – checks mostly for the legislature on the executive arm of government – because the executive as we all know executes the government’s agenda.

“These are specified functions for the different arms. In our quest for harmony and cordiality with the executive arm of government, we also believe in the National Assembly that the Executive must be held to account.

“And, we will not compromise on this, because we are expected by the constitution and the people to undertake those very important functions in addition to our representative roles to the people we represent and the legislature itself.

“So, oversight is key and important for us, but we also emphasize that unless it becomes absolutely necessary, the citizens should not be denied of benefits from programmes and projects, because of fights and disharmony between the two arms of government – the executive and legislature.

“The essence of any government according to our constitution is to provide security and welfare to the people.

“The ordinary man doesn’t want to know why you will fight and the fight stops the delivery of services. So, we believe that we must continue to work together, and in this effort, since we came in June 2019, we have been able to achieve so much.”

Lawan added further that in ensuring the delivery of infrastructural and economic development in accordance with the manifesto of the ruling All Progressives Congress (APC), the Senate had severally engaged the Ministry of Finance, Budget and National Planning on the need to rollout an economic plan that complements the nation’s annual budget.

“In the Senate, the Committee on National Planning and Economic development has had a round table discussion and we are working with the Ministry of Finance, Budget and National Planning to see how we can go back to this means of creating a rolling development plan for our country rather than this annual budgetary process that we do that stops within the year.

“But the Medium Term Expenditure Framework that we do in this administration today provides some direction even though it is not exactly what we want,” Lawan said.